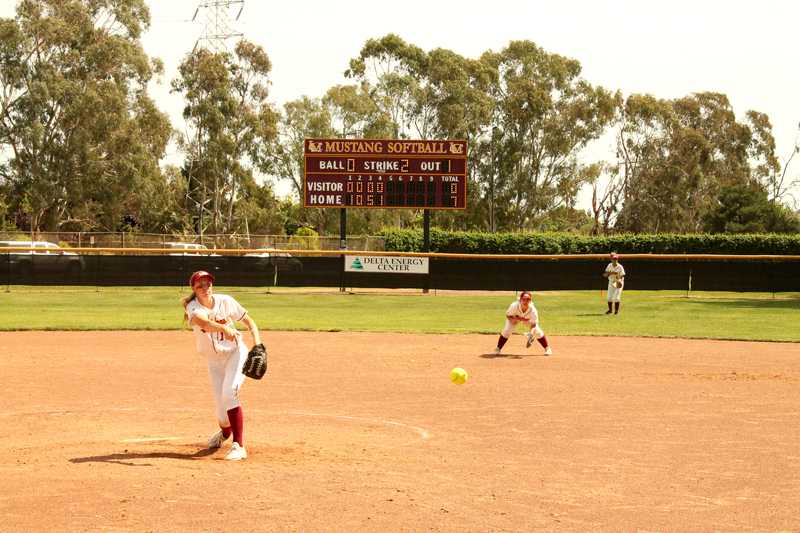 Jenna Leavitt allowed only one hit against Yuba College in the first game of a double header on April 9, 2015. The Mustangs split the double header.

The Los Medanos College softball team fell 2-1 to Yuba College in the second game of a double-header Thursday, April 9. An 8th inning run sunk the Mustangs after strong defensive showings from both teams.

Coming off an 8-0 romp in the first game, the Mustangs struggled to drive in runs after a 1-1 1st inning, eventually giving up a run in extra innings.

Yuba City opened the scoring in the 1st after pitcher Jenna Leavitt, coming off a shutout in the first game, hit two batters and gave up two singles. She quickly regained her composure and struck out the next batter to leave the bases loaded and end the half inning.

The bottom of the first saw Lyrica Langlois get on base with a walk and Jasmina Cross get the first of three hits before Vaneasia Olson drove Langlois home with a groundout.

Quincy Pierce took over pitching duties in the 4th inning and threw well for four innings, inducing Yuba’s hitters into pop-ups and fly-outs.

Both teams had opportunities over the next four innings but did not capitalize.

“We left a lot of runners on base when we couldn’t get a timely hit,” Rognlien said.

Yuba finally broke the deadlock in the 8th. Tamara Ables cracked one onto the warning track in center field for a double, Alyssa Peterson got Ables to third base on a groundout and Ashley Gilmore hit her home with an RBI single.

Coming into the game having won four of their last five games before this loss, Coach Rognlien said he is optimistic about the rest of the season.

“(The) ladies are playing outstanding softball,” he said.