Event proves to be success 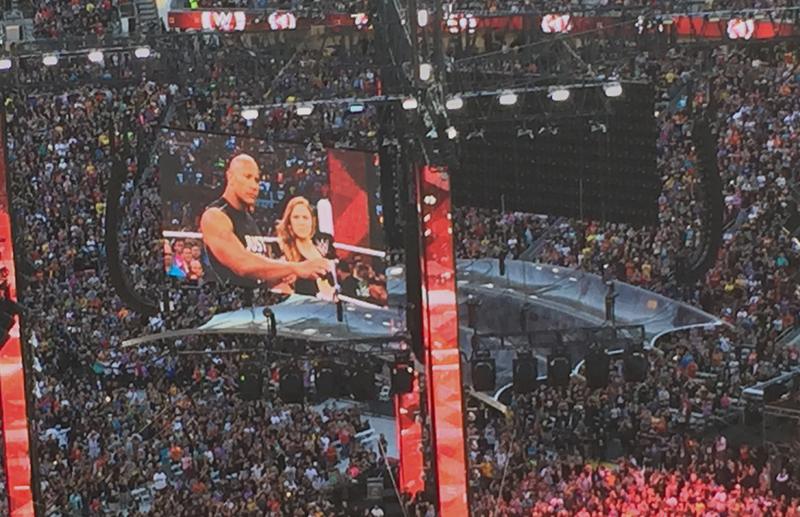 After a confrontation with the Authority, Triple H and Stephanie McMahon, Dwayne “The Rock” Johnson brought UFC star Ronda Rousey to the ring as back up.

When the city of Santa Clara welcomed its doors to the San Francisco 49ers and their brand new billion-dollar stadium they knew that with it they would get the opportunity to hold large events. Immediately they were awarded a Super Bowl on top of landing some of the biggest concerts of the summer, but they also landed an event that has never been held in Northern California, World Wrestling Entertainment’s WrestleMania.
WrestleMania is the biggest event of the year for WWE. Some people refer to it as the Super Bowl of professional wrestling, and in a way it is, but it is not the deciding spot of their one true champion.
What WWE calls it is closer to what it is. It’s called the “Showcase of the Immortals,” and while calling its stars “Immortals” is a little much, it is the place where they showcase the best of the best, and that is just what they did in front of a sold out, record setting crowd of 76,976 on Sunday, March 29.
The event was a success for WWE, Santa Clara and Levi Stadium and the setting of a new stadium attendance record was just part of it.
According to Wrestleinc.com, Wrestlemania drew fans from all 50 states and 40 different countries around the world, along with being viewed in 1.3 million households across the globe. That kind of international attention and viewership brings Levi Stadium and Santa Clara into the spotlight, and as the event went off without a hitch, it puts them in the light in the best way possible.
In addition to the attendance and viewership, this year’s WrestleMania pulled in an impressive $3.3 million in merchandise revenue, which is again good for all parties involved.
While everything around the stadium went off well, the show itself wasn’t half bad either.
From an hour before the show began, 3 p.m. local time, until the show ended the ring was filled with non-stop action.
The two matches before the show featured exciting multi-team matches and an over-the-top battle royal that kept eyes peeled to the ring to see what would happen next, which really pumped up the crowd for the actual four-hour event.
With four hours to fill there was obviously going to be some down time. WWE did not fail in making that time entertaining as well.
They featured a performance by Skylar Grey with Kid Ink and Travis Barker, and in what might have been the most talked about moment of the night, an appearance by former WWE Champion and Hollywood star Dwayne “The Rock” Johnson and UFC Women’s Bantamweight Champion Ronda Rousey.
Even though the event was nearly perfect there were a few minor issues. The concession stands were not properly stocked with drinks for the kid’s meals and the WWE WrestleMania souvenir cups ran out. The people working in the stands had quick solutions to these minor issues as they found substitutes for both and handled these issues easily.
With an event this big going so well it could only lead to more events like it in the future, and if next year’s Super Bowl also turns out just as well, Levi Stadium could be the place to hold even more large events for years to come.