Langlois a leader on and off the field

Athlete earns a 3.5 GPA while batting .500 for the season 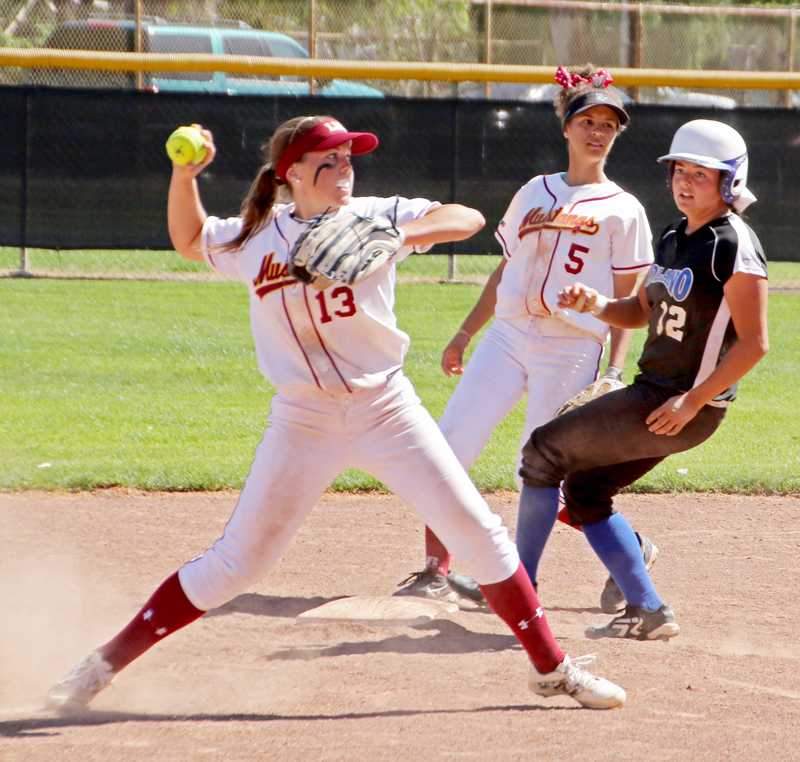 Shortstop Lyrica Langlois gears up to throw the runner out at first base during a loss to Solano College Thursday, March 19.

Scholar Athletes seem to be harder and harder to find, but Lyrica Langlois is a team captain for the Los Medanos College Softball team who plays shortstop and has a 3.5 GPA. She is no stranger to hard work.
Langlois is currently a sophomore at LMC taking 19 units, working two jobs and playing for the softball team. She admits that it can be tough working, being a full-time student and a Mustang athlete, which can cause a fair amount of stress.
“My current challenges are just keeping everything balanced and not trying to get stressed out,” said Langlois.
The management of so many responsibilities sometimes can be overwhelming, but she focuses on her short-term goals to help mold her future with support from her family, because “family is forever.”
Her strong family ties with two brothers and two supportive parents keeps her pushing along to make it through nursing school, doing her best in softball and maintaining her GPA. Her passion for baseball came from her father, which she played before beginning softball in high school. They still talk baseball today.
She currently has a scholarship for Missouri Valley College for softball and looks to attend the school in August, with some anxiety and excitement. MVC has a softball program that is part of the Division One National Association of Intercollegiate Athletes Institution, where student athletes are the center of attention. Langlois won’t have a problem fitting in, as she has been a successful student athlete even before attending LMC.
Her study habits started in high school along with her valuable softball skills as she attended Northgate High School and graduated in 2013. Her freshman year she made varsity and first-team all-league. In addition, she was a scholar athlete all four years and followed that up by becoming team captain her senior year.
Langlois continues her leadership as a team captain for LMC, along with Pitcher Jenna Leavitt, and has significantly helped improve the Mustang’s record to .500 at 6-6 in conference play. The Stangs are currently third in the Bay Valley Conference.
“Lyrica is also batting around .500 this year and Jenna has a 1.25 ERA,” said Los Medanos Head Coach Tim Rognlien.
However, all that work takes up time and Langlois admits to lacking a social life at times, but enjoys playing with her team. She likes the group she’s with and commends them for always sticking it out and never giving up, which gives her more of a reason to give it her all on the field whether it be at practice or in a game.
Langlois’ main passion consists of playing softball, but like any other college student she enjoys her down time.
“My favorite things to do would be playing softball, spending time with my family and friends along with my dog, watching movies, and eating at new places. My favorite movie is ‘Love and Basketball’” said Langlois.