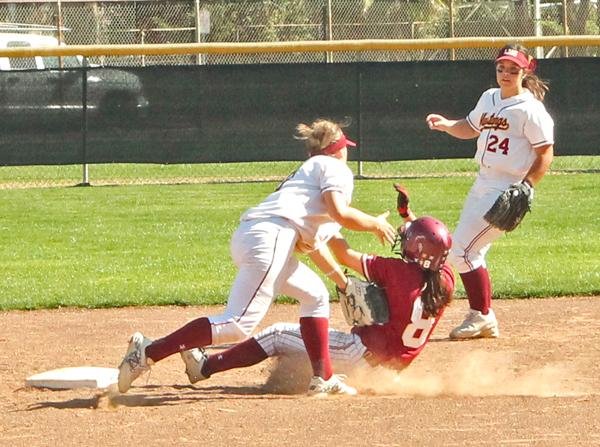 Shortstop Lyrica Langlois tags out Redwoods' Morgan Psalmonds as she tries for second base.

The Los Medanos College softball team defeated College of the Redwoods in both games of a doubleheader March 7. The first of the two was more of a contest as it took an extra frame to decide the game.

Through the first three innings of game one, no runs were scored on either side. LMC looked to change that with some daring play.

Second baseman Crystal Hicks collected a base hit and then was subbed in by Gabrielle Worley to run the bases. Worley stole second, advanced to third on an error and finally scored a run off of a suicide squeeze.

With the Mustangs now on the board, the Corsairs were able to bounce back with some solid hitting.

In the fifth, LMC Pitcher Jenna Leavitt found herself in some trouble with the bases loaded.

Redwoods’ Krisha White took advantage of the situation and hit a double, bringing in two runs to put her team up. Catcher Mackenzie Burgess then followed with an RBI hit bringing in Morgan Psalmonds.

Krisha White was now on third and was able to score after LMC’s catcher attempted to throw for an out at second base. White made it home safely and scored the fourth run of the inning. The Corsairs took a three-run lead late into the game when the LMC bats awoke.

Third basemen Maria Reyes hit a double to get the party started. Outfielder Renee Smith would then get on base putting Reyes in scoring position. LMC’s Brittni Brown would bring them both in after hitting a double. The score was 4-3.

Brown would later sneak to third off of a wild pitch by Redwoods’ Brielle Matson. LMC’s shortstop Lyrica Langlois then tied the game up with a hit.

The tie remained throughout the seventh inning, which caused the game to go to extra innings, but with a twist.

“You have a choice of either playing international [rules] for the eighth inning or just keep continuing playing,” said LMC Head Coach Tim Rognlien.

The rule allows a runner to start on second base for each team at the beginning of the inning. The idea is to quicken the pace and finish the game faster.

LMC was able to end the game in the eighth by knocking in Ashleigh Stephens-Coley, who started the inning already in scoring position due to the rule.

Third-baseman Reyes hit a dribbler out in front of the plate and was hit in the head with the ball as she was running to first on the throw by the Corsairs catcher.

The miscue gave LMC base runner Stephens-Coley the opportunity to round third and score, ending the game at 5-4.

“The first game was tough, we got the extra innings, we competed but we just couldn’t finish in the end,” said Redwoods Head Coach Maggie White.

In the second game, White felt her team wasn’t all there, adding, “I didn’t feel like we competed as well.”

Quincy Pierce was the starting pitcher in the second game for the Mustangs and ended the afternoon with four strikeouts.

Unlike the first game, LMC got on the board quickly.

Catcher Jasmina Cross hit a double that brought in Langlois. Hicks then doubled to bring in Cross that gave the Stangs a 2-0 lead early.

The score remained the same until the fourth inning when the Redwoods scored twice to tie it up.

In the same inning, the Redwoods fell asleep on defense and LMC’s Stephens-Coley would stole home to put the Mustangs back ahead 3-2.

LMC scored two more runs in the sixth giving the team five runs with a Stephens-Coley double that brought in Marie Rios. Coley later stole third and the Redwoods tried to throw her out, but produced an error. Coley quickly realized it, got up and ran home for the final run.

Pierce had two of her four strikeouts in the final inning. Good pitching and good fielding led to the 5-2 win for LMC.

“Quincy [Pierce] pitched really well, and kept her composure when things were going down,” said Cross.

The Mustangs next home doubleheader is Thursday, March 19 against Solano College at 1 and 3 p.m.