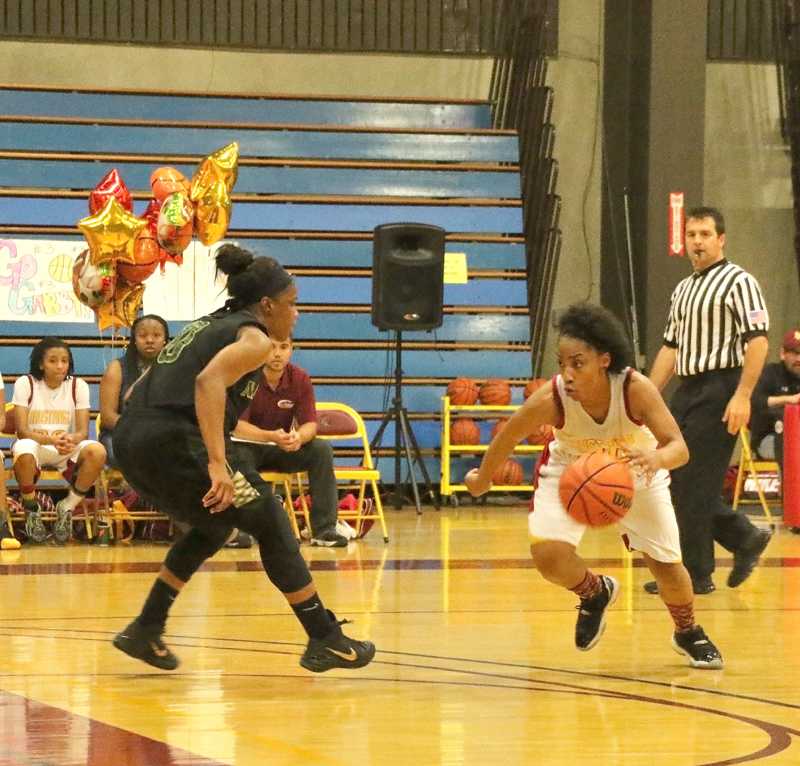 Guard Imana Samuels drives passed a Storm defender on her way to the basket.

The Los Medanos Mustangs faced the Napa Storm on February 18, 2015 in a game that went down to the wire with a 61-59 victory for Napa.
The last home game of the season brought a decent crowd to show support on sophomore night. LMC Head Coach Richard Villegas honored six sophomores before the game, which was the most he’s ever done.
“The girls seem overly excited for tonight and super hyper,” said Villegas.
The start of the game proved just that, with the girls looking a little fidgety and excited to play in front of so many friends and family. After a timeout by Villegas, the girls settled down and got their heads in the game.
Forward Mykaela Jones got the group going with a coast-to-coast finish to put points on the board. She scored four of the first five points, but it was still a slow start for the Mustangs.
Halfway through the first half, sloppy passing and ball movement put the Mustangs down ten. They rallied back to tie up the game at 32 a piece in the last minute of the half, but Napa Guard Kianna Simms would sink a 3-pointer just before the half expired putting them up 35-32.
After halftime, LMC came out and quickly built a lead. Forward Quinisha Hall had a better half and made a couple 3-point bombs that helped to put her team ahead eight.
More back-and-forth play ensued with the lead staying the same until Napa’s Simms hit back-to-back threes that shifted the momentum of the game. The margin was now only one point, 52-51, with LMC still holding the lead with seven minutes to play.
The game began turning into a free-throw spectacle where plenty of points were left on the line for Napa missing five straight as a whole.
The game was close with a minute and a half left with Napa ahead 58-55. Napa would get one more point off a free throw, but LMC Guard Imana Samuels sunk a deep ball with 10 seconds left making it a one-point game at 59-58 with LMC behind.
LMC’s home crowd standing and chanting “defense” wasn’t enough for the Mustangs to get a stop. Napa scored, but with three seconds left on the clock LMC’s Samuels was fouled on a 3-point attempt.
She had the opportunity to tie the game up at 61 with three free throw attempts, but came up short. LMC grabbed the offensive rebound and put up one last shot with a lot of contact. The shot wasn’t made and the refs didn’t blow a whistle. The end result was Napa 61 and LMC 59.
Napa Head Coach Vince Shaw and his Assistant Trey Simms were proud of the effort, even when shots weren’t falling.
“They stuck together, played together and Kianna (Simms) hit some big shots, and we try to go to the hot hand,” said Coach Simms.
For LMC’s Villegas, it was a great game on an emotional night. He has never had to watch so many sophomores move on.
“You grow attached with the girls after working with them for two years, and I’m gonna miss them,” said Villegas.