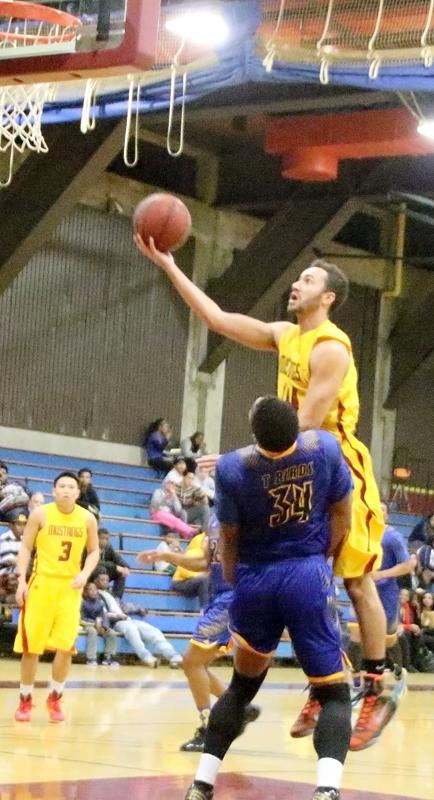 LMC guard Marcus Walton takes on Merritt's Dannon Lemon in the nine-point loss to the Thunderbirds.

Following a ninth straight loss to Merritt College, Los Medanos College is still looking for a win this season in their conference with an 0-9 record.

Jan. 22 game, with a final score of 73-64. Merritt holds a record of 7-2, which gives them a second place spot and makes them a tough match-up for the winless Mustangs. “They’re one of the highest rated teams in the state,” said LMC Head Coach Derek Domenicelli, “We played very well against them… my guys played hard and together and hung pretty tough.” The single-digit deficit was encouraging for the struggling team, and Merritt just hit a couple more shots down the stretch when it mattered most.

Shooting Guard Wayne Englestad sunk nine shots from downtown, which gave him a total of 34 points, and even though Domenicelli said Eric Jackson had one of his best games all year, he added it still wasn’t enough.

“The last two minutes could have gone the other way,” said Domenicelli, “I like [their] attitudes and hopefully we get over this hump quickly and get a win.”

Merritt Head Coach Keenan McMiller commended LMC’s level of play and said they shouldn’t beat themselves up over the loss.

“Wayne is a great shooter,” said McMiller. “If they have a hot night and they are shooting it can make it tough, but if they got hot [tonight] it definitely would have been a different game”

Although Merritt is one of the top ranking teams in the league, McMiller admitted his team had some difficulty with the Mustangs in a game that was decided in the final minutes.

“We played better team basketball, but we got to be playing a lot better,” said McMiller of the close call. “All we can do is handle our business and see what happens.”

Hopefully LMC can bounce back with repeat performances from both Englestad and Jackson to close out a game and bring home a “W.”

For a schedule of upcoming games go to http://www.losmedanos.edu/basketball/list/mens.asp.