A new coach, a new focus and a new year for softball 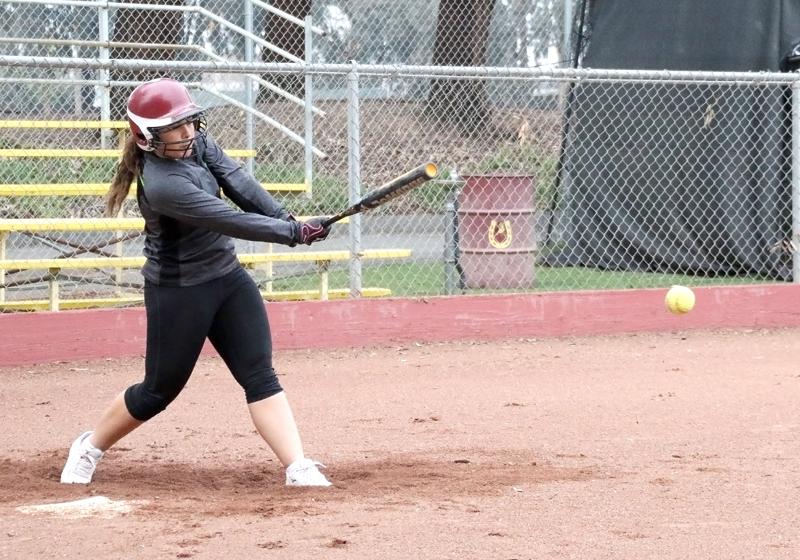 As softball prepares for the upcoming season Jasmina Cross works on her swing during batting practice.

Batting practice is in full swing and the softball team is set to take the field this season under the direction of interim head coach Tim Rognlien. With an upsetting previous season in the back of the minds of all the players, hopes are high for the team as they prepare for their first game against San Francisco City College Saturday, Jan. 31.
“We’ve only been together for a little over a week,” said Coach Rognlien as he spoke of the lineup on this semesters softball team. “I see some talent out there.”
No stranger to coaching softball, Rognlien previously served as Assistant Coach at LMC from 1999 to 2005, in addition to an additional twenty years coaching experience in the Bay Area.
“The strength of a team is up the middle,” says Coach Rognlien, describing the area of the field that covers the positions of catcher, pitcher, second base, shortstop and center field. “This team is strong up the middle.”
And at the center of this “middle” stands Jenna Leavitt, who returns to the mound once again this season as the team’s primary starting pitcher.
“I think we’re definitely going to be more competitive than in the past,” said Leavitt, comparing the skills of her teammates and coaches to previous seasons. “The whole coaching staff is a great group.”
At her new, full-time position at second base, Crystal Hicks agrees with her teammate on the new head coach, as well as the rest of the coaching staff.
“They’re all amazing,” said Hicks, going on to add, “They’re very qualified and know what they’re talking about.”
With a confident team, led by an experienced coaching staff, determination and the drive to succeed this season is at the top of everyone’s list.
“Everyone is working real hard,” said returning shortstop Lyrica Langlois. “We’re really working well together. We’re all buds.”
As the preseason draws closer, the team and their coaches continue to get ready to face-off against many of the same opponents from last year, including Solano College, new home to former head coach Tim Griffith.
“I think we have a lot of talent out there,” said assistant coach Chris Ball. “Now it’s a matter of getting out on the field, get ready to get dirt in their skirts.”