Cooper finds strength on the field 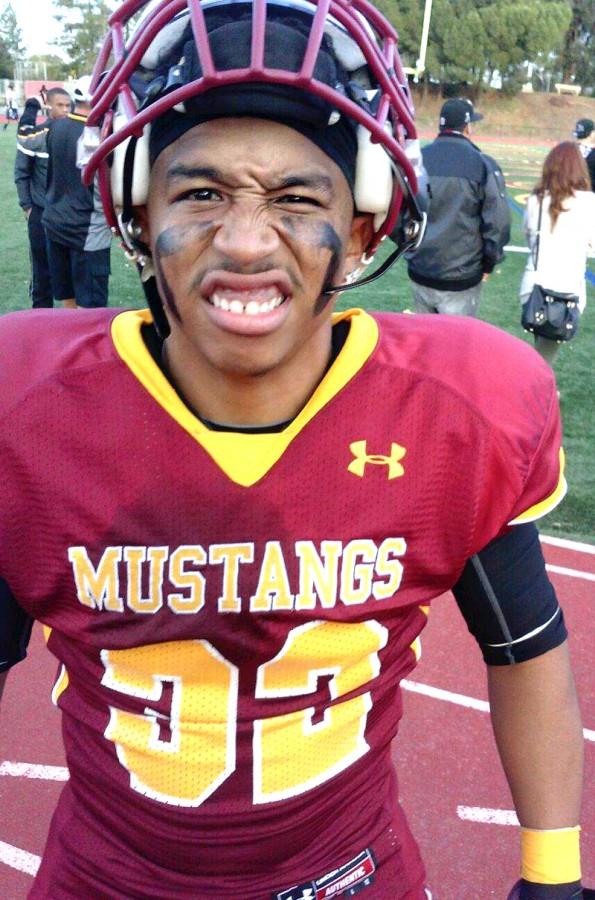 D’metrius Cooper is dedicated to football as it provides him with motivation toward a brighter future.

The stench of the Los Medanos College locker room flares the nostrils and padding up excites cornerback D’metrius Cooper, who is eager to get on the field.

He had a long day, but football requires a lot of work. He cannot quit now, he needs to keep going and release some aggression.

Cooper learned early on that nothing comes easy in life and relentless hard work is the key to success.

As a child he grew up in Oakland and was raised by his single mom, Ariene Cooper, who worked multiple jobs. She would drop Cooper and his twin brother Darius at their aunt’s house while she struggled to make ends meet.

“We didn’t know if she was gonna get us in the morning,” said Cooper. “She was working three jobs.”

Cooper remembers his mom explaining that hard situations aren’t won by soft people, and when he and his brother were 9 years old they moved to Antioch with their mom who by then had gotten a single job that provided for the family with a more stable schedule.

His mother’s new job proved the value of dedication to Cooper, who is currently midway through pursuing an associate of arts degree in kinesiology. He credits his education for his football opportunities. “I couldn’t play football if I wasn’t going to school,” said Cooper.

For him, football is therapy and football is life. The sport first attracted him because of the physicality which would calm him down. However, it takes a lot of commitment.

“You gotta give your life, you really got no time,” he said. But his value for dedication doesn’t allow him to waste that time. His current position at corner is why he wants to get leaner, stronger and faster.

The cornerback’s job at the defensive end focuses on reading passes, quick feet and reaction, and tackling to be able to cover your zone or receiver.

“You want the receiver you’re guarding to have zero catches,” he said. He has gotten stronger by increasing his bench by 60 pounds since last year.  However, he still thinks he can do better.

“I’m really not that fast and I got some extra weight,” he admits, “and sometimes I forget to eat well… I just eat like sh*t ya know.”

This gives him motivation instead of crushing his inspiration.

His inspiration comes from his mom and twin brother. He and Darius spent a lot of time with each other growing up and they always have  had each other’s backs.

Cooper also inspires his brother Darius who believes nobody puts more effort into his goals and relationships than him.

“He’s one of the hardest working people I know, he’s a locomotive that just keeps going and never quits,” said Darius, adding, “And he’s always been there for me and our mom.” Darius believes he has a twin brother for a reason and that he wasn’t meant to be alone.

The everlasting brotherhood, loyalty and camaraderie come from having a relationship with his brother.

“Sometimes we’d be playing together and get into it,” he said laughing, “We’d have our fights and two minutes later be perfectly cool with each other. We’ve always been close no matter what.”

But now they face a geographical barrier. Darius and his mom moved back to Oakland, where he now works and attends school. It’s hard for Cooper at times, who lives with his godparents in Antioch, but memories help him out.

It was Darius who actually played football first and turned Cooper on to the sport. Cooper preferred baseball and basketball in his early years as an athlete, but he finally found his true passion with football in high school.

“I liked hitting people to let out my anger and aggression to calm down,” said Cooper.

Since football is a more physical game, it became a way of relieving stress. When he thinks everything is going wrong, he said, football brings him back and puts things into perspective.

“Nothing else matters, when I’m out there, that’s it, that’s all I have to do is play ball, and I like that,” he said.

After recently completing his freshmen year on the LMC football squad, he hopes to build on his skills and improve play next season.