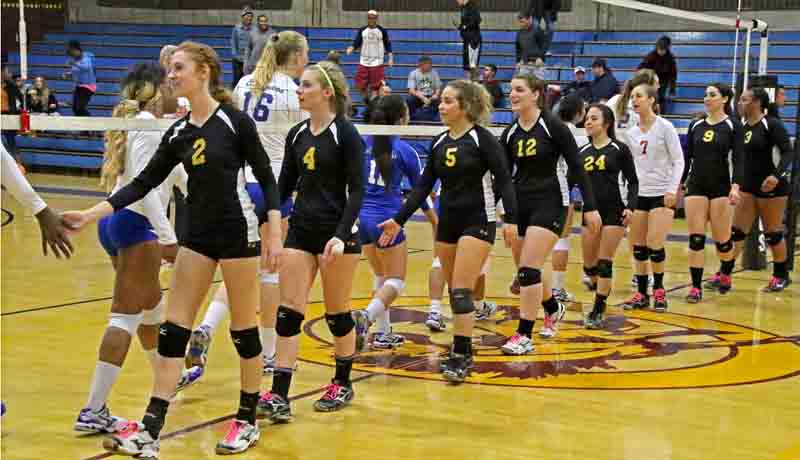 The team high-fived the Alameda players following the last home game of the season.

Mustangs Volleyball finished the regular season with a three set shutout of the College of Alameda on Tuesday, Nov 18. The win was the final game of the season for the Stangs who now wait to hear if they will make the playoffs.
After a loss to Yuba College Friday Nov. 14, the game was a must win to keep the hopes of making the playoffs alive.
They knew what they needed to do and they came out on fire in the first set with a dominating 25-5 win.
They carried the energy from the first set into the game, knowing playoffs were on the line.
“We went out on the court with so much energy and we played with great intensity,” outside hitter Anna Vega said of the team’s performance.
Alameda fought back in the next two sets, but still fell 25-16 and 25-14, as the intensity of the Mustangs was too much for them.
Taylor Scriven had another all-around good game in her final home game for the Stangs accruing 16 points with 11 digs and 14 kills.
“It was really nice to be able to come out and beat Alameda in 3, especially because there was so much riding on that game,” Scriven said adding, “I’m really proud of the whole team and we’re just really excited to see what the playoffs have in store for us.”
The playoffs are not a given, though. With the win, the Stangs finished in a tie for second in conference with Solano College with records of 11-3.
Head Coach Lou Panzella said it will depend on the conference committee decides on Sunday, Nov. 23, but early word is that the Mustangs hold the tiebreaker.
“Winning tonight should qualify us for the playoffs,” Panzella said. “We should know about if for sure on Sunday.”
What might hurt them in their playoff hopes is the pre-conference record.  The Mustangs are 14-11 overall, while Solano is 17-8.
The prospect of making the playoffs is big news around the school. It would be the first time Mustangs Volleyball has made the playoffs since 2003. Both Athletic Director Richard Villegas and Senior Dean of Student Services Gail Newman sent out emails to the staff congratulating the team on their accomplishments.
If the Stangs are selected to participate in the playoffs, they would play on the road on Tuesday, Nov. 25 and once they’re in, who knows what could happen next.