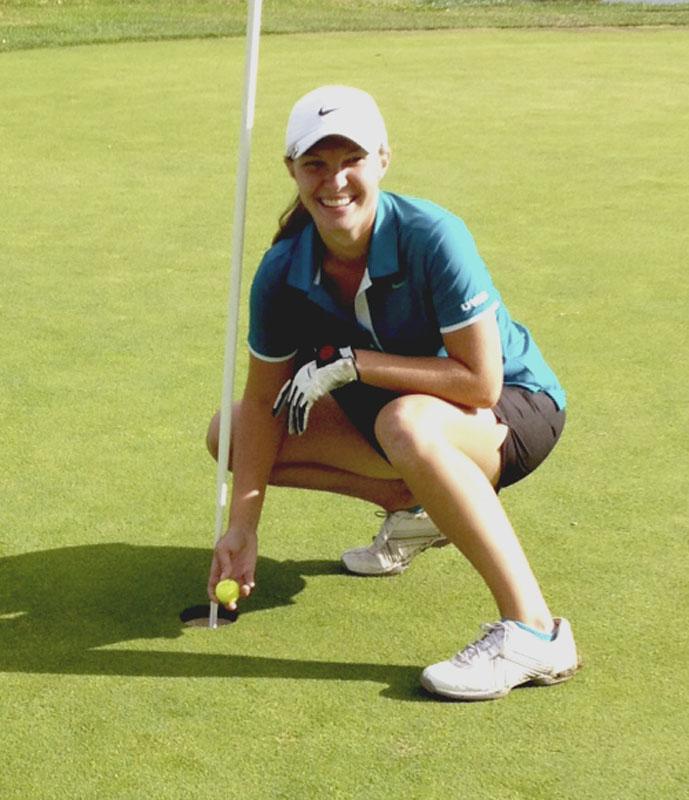 Deer Valley senior golfer Danielle French removes the ball from the cup following her hole-in-one on the sixth hole in Brentwood.

When Deer Valley High School is in the news, it is usually because something negative happened. Students, parents, faculty and staff at the Antioch, CA high school are trying to change the perception of the school buy using the hashtag theother2700 on social media.
The Women’s golf team gave those involved with Deer Valley a reason to use that hashtag on Monday, Oct. 20 when the team won the Bay Valley Athletic League Tournament by one stroke, and Danielle French scored the first hole-in-one by a female in Deer Valley golf history.
Any time there is a hole-in-one, it should be big news but when it is the first in the history of a school it should be even bigger news. Unfortunately because of the bad reputation that Deer Valley has built up over the recent years it is harder for the good news to break through the news of violence on the streets.
That is why the hashtag theother2700 has become a staple on local social media as those involved with the school try and get news like this out.
Shelly French is not only the mother of the student athlete who knocked in the hole-in-one, but she is also an Instructional Assistant for Special Education at Deer Valley and has been a member of the staff for ten years.
Having spent those years working with students Shelly has witnessed first-hand the students who aren’t making the news, the ones who are having a positive impact. This is why she is a part of theother2700 movement.
“We’re trying to get the positive things that are happening with our students and with the school out there so that people can see it’s not as bad as it seems to be,” she said. “It’s the small majority that are getting all of the bad publicity because that’s what people want to hear.”
It’s true, people do want to hear about the negative things in life because they want to know what to look out for. They want to know if they should shop at Food Maxx on Lone Tree around the time school is getting out or if they are going to get caught up in another Deer Valley brawl.
People will always be drawn towards the negative because it is news that they need to know, but they also need to know about the positive things that are happening at the school, like the first hole-in-one in Deer Valley athletics history by Shelly’s daughter, Danielle French.
By her own admission Danielle wasn’t having a very good day on the greens. She was up and down, but on the sixth hole of the nine hole Creekside course in Brentwood her day changed as she hit the ball just right.
“I was pretty much speechless. I didn’t really want to scream,” she said because her teammate was teeing off next to her.
Danielle will never forget, and neither will the school, as she will go down in history as the first female to score a hole-in-one.
While Danielle’s feat is an amazing one on the golf course it is only one of the small positive things that are going on at Deer Valley High School. For more information on the students who aren’t fighting on the streets after school look up the hashtag theother2700 on social media.