Defense thrives in all three wins 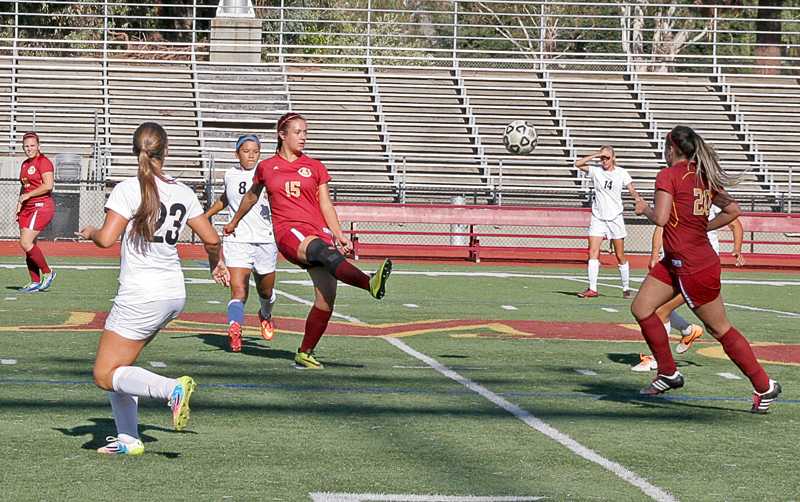 During the Mustangs 1-0 win over Butte, Lauren Ayers sends the ball upfield with a big kick keeping the ball on the offensive side of the field.

In a stretch where the Mustangs played three games in eight days, including back-to-back games, they came out on top winning all three without allowing a single goal.
The first win was huge for the soccer program for multiple reasons. It is the first shutout of the season and they scored nearly as many goals in this game as they did in their first five games combined (7 goals to 6).
Not only was it the best they’ve looked all season, Head Coach Mark Bryant said it might have been the best team he’s ever seen in his 13 seasons at LMC.
“We pushed the ball around better than any team we ever had at LMC,” he said. “They really responded well to what we have been wanting to get them to do with the ball.”
Even though this is a big win for the team, it did come against a team they were expected to beat.
Marin College is a team that is rebuilding their soccer program and although the team was shutout, Head Coach Chris King believed his team played well despite the score.
“Our team is rebuilding this year so we knew that coming in we have a lot to learn, and a lot of struggles,” he said. “Obviously a much better second half than first half for us, and I was very happy with the adjustments the girls made in the second half.”
Although they played better in the second half, King’s team still gave up two goals, including the third goal of the day for forward Mikayla Farber, giving her a hat trick and seven goals for the season.
The win to start conference play gives them something they didn’t have all of last season, a lead in the conference, even if it is only for one game.
The early conference win and lead are only a start, though, for coach Bryant’s team as he expects them to get right back to work because they would be turning right around and playing another game the next day.
While offense is the obvious point of focus when a team scores six goals, it was the defense that really stepped up allowing only three shots on goal.
In the second game they didn’t look quite as dominant playing on consecutive days, but they managed to pull out the victory defeating Butte College 1-0.
Part of the fact that they didn’t quite dominate like they did on the previous day had to do with playing two in a row, but they also played a tougher team. The record doesn’t quite show how good Butte is as they only had one win coming into the game, but four of their five losses were also by one goal.
A fifth loss by one goal is tough for any team and Head Coach Tony Salindong is searching for answers on what can be done differently.
“We are definitely searching for answers,” he said. “We had a positive second half I thought, however, you know sometimes the ball doesn’t bounce your way.”
Butte’s struggles are not just on the field as they struggle to score, but they are also dealing with injuries. These kinds of struggles together with injuries can cause teams to fold, but Salindong’s team keeps fighting.
“It’s definitely a test of character for us,” he said.
That character could go a long way to helping Butte when they head into conference play. Meanwhile the Mustangs hoped to use this brief one game out of the Bay Valley to help prepare them for their second game in conference against Contra Costa.
Head Coach Mark Bryant said although they won there is some area for improvement heading back into conference play.
“They need to learn how to stay a little cooler under pressure,” he said. “The teams we play (in conference) are going to give a lot more pressure and they need to learn to be a little more aggressive.”
Despite not being aggressive enough the team was still riding a two game winning streak and they then followed that win up with their second conference win defeating Contra Costa College 4-0 for their third consecutive win and third consecutive shutout.
The win continued the trend of great defensive play by this team, but the big highlight of the all of the games was the six goals by forward Mikayla Farber.
Farber now has ten goals on the season, good for sixth in the state and looks to add to that total as they head into the next two conference games against Mendocino College and Folsom Lake College.
The big test will be against Folsom Lake as they currently sit on top of the Bay Valley with a record of 3-0 in conference play.
Both games will be at home as the Mustangs take on Mendocino, Friday, Oct. 3 at 3:30 p.m. and Folsom Lake, Tuesday, Oct. 7 at 3:30 p.m.