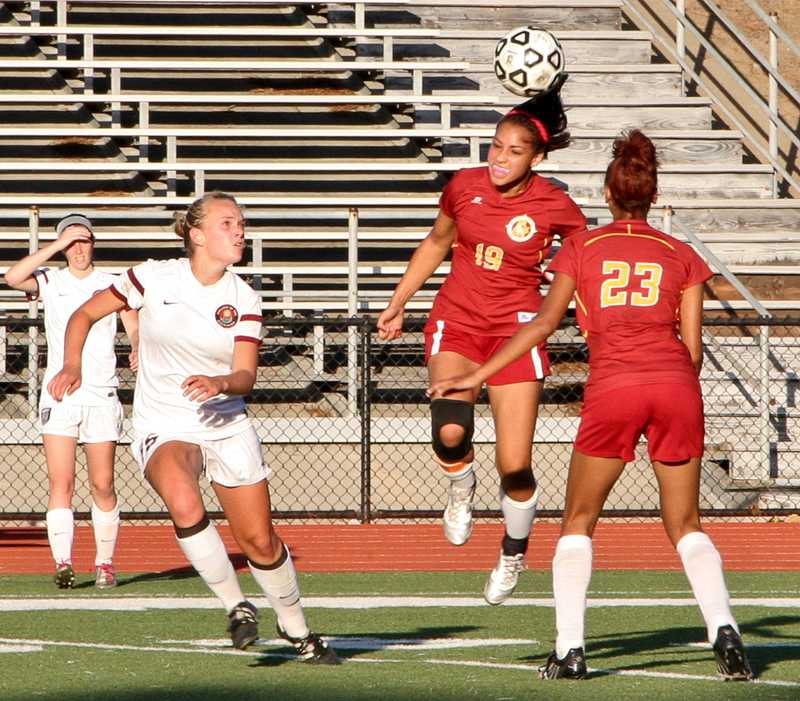 The Los Medanos College soccer team won 5-1 in its last preseason game Sept. 12 against College of the Redwoods.

Devyn “Scooby” Keller (23), nailed a hat trick during the first half, racking up a three-goal lead for the Mustangs right out of the gate.
Mikayla Farber (5), scored the final two goals for LMC in the last half securing the win.

Even though the team won, it isn’t being toasted as a success because the players still have a lot to work on.

“I definitely think it wasn’t the way that we wanted to win the game,” said Assistant Coach Heather Wren.

Redwoods dominated the field most of the game, keeping control of the ball and pressuring the LMC defense.

But there were a lot of breakaways and through balls which gave the Mustangs control of the scoreboard, making it difficult for CR to recover.

Wren said the team needs to work on runs, possession and movement off the ball. Anticipation and making better decisions will be important in the upcoming season, which starts next Friday.

“This team has a lot of potential to progress,” she said adding that if they don’t work out the kinks, upcoming games could prove to be challenging.

Keller was happy about the win but said they didn’t maintain a real position game, acknowledging, “We should have played better.”

The season starts next week, she said, so the games are going to get harder. They will need to play the ball more because the team can’t depend solely on making runs to get in the net.

John “J.D.” Davidson, Redwoods head coach, said his team got caught high and some through balls allowed LMC’s Kelley to use her speed and score.

After falling behind, the Corsairs made some adjustments and Davidson thought things were looking better but LMC still managed to score two more goals.

“I was disappointed that we allowed two goals to come in from crosses through the six that I think our goalie and center defender should have handled,” he said.

In the last few minutes of the game Redwoods finally got on the board thanks to forward Kiana Adams (7), with assistance from center back Kaylee Holland (16).

Even though the Corsairs lost, Davidson said it was an extraordinary opportunity to come and play the first preseason game against the Mustangs.

“Overall, for a new team this was very exciting for us,” she said.