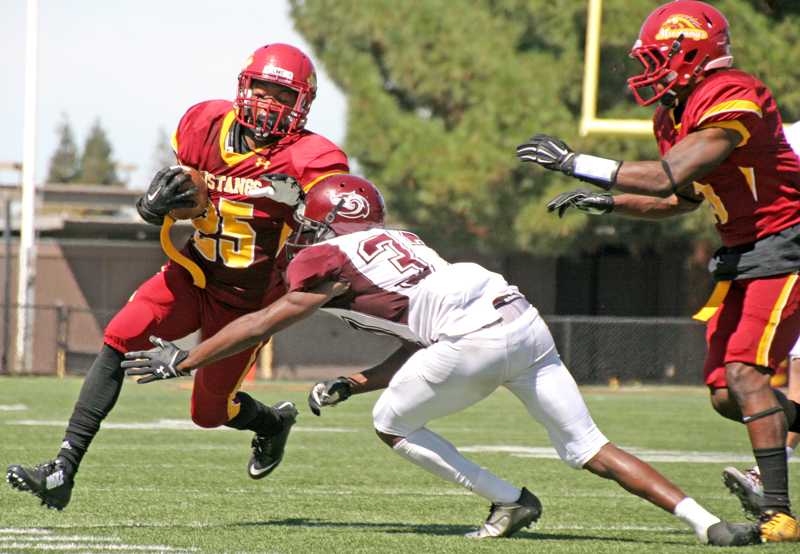 The Los Medanos College Mustangs scored an unanswered 20 points and came back from a 16-point deficit in the fourth quarter to pull off a hard fought victory over the Monterey Peninsula Lobos 41-37.

The first three quarters featured four Mustang turnovers, two lost fumbles and two interceptions, along with two long runs that were called back due to holding penalties.

“Uncharacteristically, we threw an interception for a touchdown and fumbled the ball inside the 20 [yard line]. Those were points we gave up, we just have to fix those,” said ‘Stangs head coach Chris Shipe adding, “Luckily we came out on top today, but later down the road those are going to hurt us, and that could prevent us from winning a game.”

Offensively, LMC was led by running back Jamal Lockett, who rushed 20 times for 126 yards and a touchdown. He was also the second leading receiver, taking a 48 yard catch, his only one of the day, to the endzone.

On the other side of the ball, defensive back Shecari Johnson and linebacker Markie Beltram picked off Lobos quarterback Keon Marsh, who otherwise had a solid game, throwing for 334 yards and 3 touchdowns, along with adding 32 yards on the ground.

“It was a rough, scrappy game. We were up and down, [there was] miscommunication from the receiver to the quarterback,” said Mozee adding, “Our linemen had to adjust to changes their defensive linemen made, but we fought hard and it was a great win.”

The Mustangs will be on the road the next two weeks against West Hills College Friday, Sept. 19 and San Jose City College Saturday, Sept. 27.