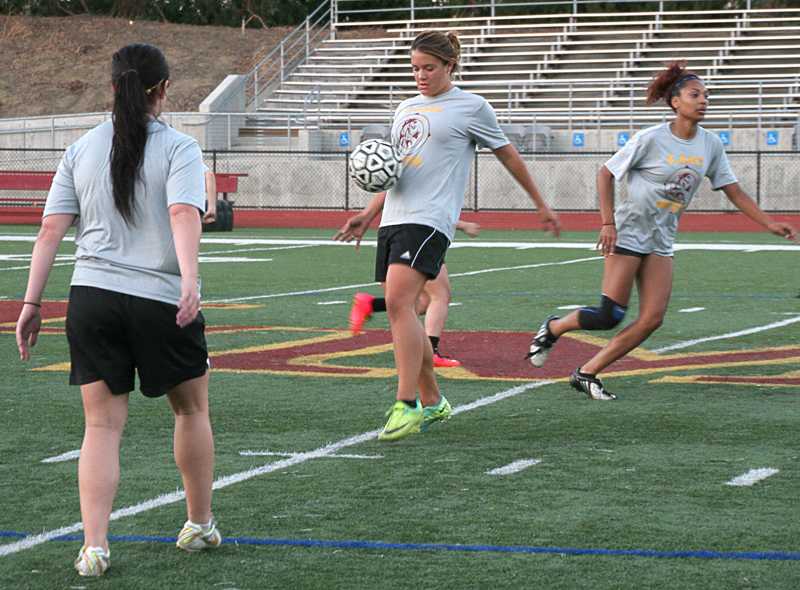 Lauren Ayers controls the ball with her body while Devyn Kelley runs the field during practice for the start of the 2014 season.

The Los Medanos College soccer team has high hopes for its upcoming season, starting with the first pre-season game Friday at 6 p.m. against Sacramento City College on home turf.
“We actually got our butts kicked pretty good by `em,” said Head Coach Mark Bryant of last year’s game against Sac City. “So, we are looking to see a much different result this time.”
Last year the game was at Sac City, but this year the team has home field advantage and a better squad to show against them, explained Bryant. “I think they will be surprised.”
Currently the team is composed of 16 players, only three of whom are returning from the previous season.
“It’s a huge commitment for young ladies at this age,” said Bryant who went to every high school in the area last year to recruit players. “They are trying to work, juggle school and play soccer all at the same time.”
Just about everybody on the team is new this year and normally this is a disadvantage, especially since last year’s team had made major improvements, but Bryant thinks he has a much stronger group of players this fall.
“We have more athletes this year,” said Bryant, adding that the team’s fitness is at a higher level at the beginning of this season. “That’s a big, big, big plus for us.”
The team is going to be more offensive oriented, whereas last year the defense dominated.
“We have a lot more offensive power, speed and we got people that can score goals,” he said.
Bryant said they “would love to win league” but acknowledged that could be difficult because there are “some really strong teams in our league.”
Mendocino College, Folsom Lake College and Solano College will be the toughest teams the Mustangs will face this year, but Bryant thinks the team members are going to amaze everyone with what they can do.
Hannah Tanuvasa, a new player from Hayward High School, thinks the team is going to do well because players plan to be aggressive and communicate, adding that that they will “handle business in and out of the classroom and on the field.”
“Hopefully we grow as a team and win games,” said Mikayla Farber, who is both excited and nervous about the upcoming season.
Farber, a former Liberty High School soccer player, had to red-shirt last season due to a bad knee but Bryant is anticipating she will be the big goal scorer this year.
“We would like to develop a competitive soccer program in the Bay Valley Conference,” said Athletic Director Richard Villegas adding they would also like to increase the number of women soccer players who transfer from LMC to four-year colleges and universities.
The coaches are always looking for new talent, even though the season is about to begin, and if you would like more information about joining the team please contact Coach Mark Bryant at [email protected] “It’s never too late,” said Bryant.