Concussion in sports a long-term headache 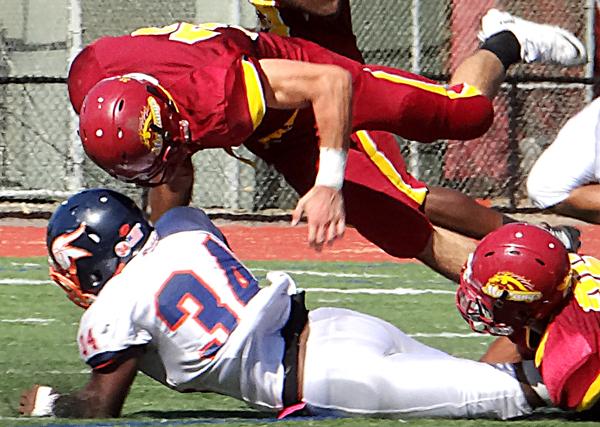 A potential helmet-to-helmet hit in the Oct. 5 LMC vs. West Valley College game.

Contact sports such as football are quickly taking rule over the sporting landscape. It is partially due to the facets of the game itself, but gained true popularity because of the highlight reel hard hits.

As fun as they can be to watch, those hits can be highly detrimental to players on both ends of it. In recent years, sports as a whole have attempted to take steps to nullify these injuries, but concussions still hold true as the most potentially dangerous of them all.

Of the four major sports in the United States, football and hockey are the two where, game-to-game, there is a high chance that a player will receive a concussion.

In the 2012 NFL season, there were 217 reported concussions in 333 preseason and regular season games according to a CNN study.

According to a PLOS ONE study, during the 2011-12 NHL season, there were 6.83 reported concussions per 100 games played. Even in sports such as baseball and basketball, concussions can happen by being hit with a pitch or a hard line drive, or going up for a dunk and hitting the court hard on the way back down.

The violent aspect of these sports, such as the helmet to helmet hits, the spine-shivering tackles, the outfield or home plate collisions and the checks into the boards are often the most exciting plays to watch.

Of 130 students surveyed by the LMC Experience staff, 102 (88 percent) said contact sports would not have the same appeal if the collisions and hits were not a part of the games.

Fans crave and enjoy watching somebody get their brains knocked in or put their bodies’ and lives on the line for our entertainment. but do fans really know the true extent of what happens to the head during a violent collision?

According to medical professionals, a concussion is defined as a traumatic brain injury that alters the way your brain functions, caused by either a direct blow to the head or an indirect blow to the body. This then causes the brain to either strike the inner skull or head to rapidly rotate, resulting in the shearing and straining of brain tissues.

”You don’t get more brain cells,” said Sutter Delta Vice President of Medical Affairs Dr. Brion Dr. Pearson. “Your maximum brain capacity is teenage and early adulthood. And then it is a downhill slope from there. Every time you get a blow to the head, you are at risk of killing brain cells. You don’t replace those. Your brain is what makes you who you are, your ability to remember things, to reason, to plan, to imagine. Your imagination is the greatest gift you can have. Once they’re gone, they’re gone.”

According to the Sports Concussion Institute’s report on concussions, a total of 1.6 to 3.8 million concussions occur each year. Additionally, five to ten percent of all athletes will receive a concussion at some point in every sports season with football being the most likely to occur with a 75 percent chance.

Out of 137 students asked, 41 said they had suffered a concussion in the past. Only 35 percent of students surveyed said they had been properly educated on the severity of concussions and the risks they pose.

47 percent of the athletes who suffer concussive blows do not report feeling any symptoms. This can be due to players not suffering any immediate side effects, or by a blatant ignorance on the athlete’s part to stay in the game. However, the message should be loud and clear; if a concussion is suffered, athletes must pay attention or risk suffering permanent ailments.

“The culture of competitive sports is that athletes are going to minimize the effects on them while they are still trying to play,” said Pearson. “While no athlete wants to be on the bench, they are not thinking about their futures. There are a great many that go undiagnosed.”

Former LMC football player Bryce Perez noted that coaches paid keen attention to players if they suffered a head injury of any kind.

“Coaches don’t want players in the game with head injuries,” said Perez adding, “Players most definitely do not. A person with a concussion forgets everything for a bit and doesn’t remember play calls or job assignments. We would get guys out as soon as we noticed, although (it) could have taken a play or two to notice.”

Of 122 students surveyed, 24 said they had their “bell rung” in a game but continued to play anyway due to fear of letting the team down. 34 percent of 123 surveyed said they witnessed someone else stay in the game after receiving a hard hit.

Common side effects from concussions can range from physical ailments such as headaches, dizziness and nausea; cognitive ailments such as difficulty with concentration, memory and judgment; emotional problems such as irritability and depression, as well as balance and coordination issues. The seriousness of the concussion depends on the exact injury that occurs to the brain.

While the effects are usually temporary, doctors warn that even a single concussion can be one too many.

With increased concussion awareness being brought forth, many have examined the safety and practicality of youth sports, which have been reportedly been on the decline in recent years. This has caused those within schools to take a different approach on how to better protect its student athletes.

“I believe it’s serious because these student athletes have the rest of their lives to grow and if you are injured at a young age it could affect you in your abilities in school and athletics,” said Freedom High School Basketball Coach Mike Pineda. “We, as high school coaches, are required to take courses concerning concussions to be able to recognize symptoms and how to treat them by removing from play and seeking medical attention.”

In 2013, after years of extensive studies and research indicating the severity of concussions and its effects, the NFL reached a $765 millionsettlement with 4,500 former players who claimed to have suffered long-term disabilities as a result of head injuries sustained during their careers.

The settlement was widely seen as a win-win for all parties; however, fans and certain players believe that athletes are smart enough to know what they are getting themselves into.

“I don’t feel sorry for athletes,” said former LMC student Tyson Rochelle. “They know what they’re signing up for. Everything comes with a price. And if they’re not ready to deal with the consequences later on in life of being broken, then go get a 9 to 5 job.”

Concussions are a serious and growing topic of debate, and it appears that the discussion is moving in the right direction. New rules and standards have been enforced, protective gear is getting better and medicine is advancing.

“I think as they find out more, people become more aware of the cumulative nature of this over time, there will be more changes, more restrictions,” said Dr. Pearson. “But, you don’t want to take the fun out of the game either.”

Coach Pineda added, “I think there are always new ideas and equipment constantly being made to continue to protect our student athletes regardless of the sport whether it is contact or not,” said Pineda. “New rules and guidelines are always being brought forward to protect athletes.”

In the NFL, if a player may have some sort of head trauma the team neuropsychologist performs a sideline concussion assessment which features tasks such as basic questions to test the players awareness. For example, they would ask what month it is and the quarter the game is in currently. There are also word recall trials which ask players to recall a list of five words spoken to them in any order. If a player is diagnosed with a concussion, they leave the field for the locker room and remain with medical personnel for the remainder of the game. If they are stable, the player will be sent home and will be re-evaluated the next day.

Gradually, players will be tested again and will have to complete more advanced versions of the test, as well as building up physical activity.

Once the team doctor says a player is good to go the next week, the player is evaluated by another physician who is not working for the team. That physician must also sign on the player’s return in order for him to play.

The NHL policy is similar, although players who are thought to have a concussion are removed from the game and taken to a quiet place free of any distraction, as opposed to being tested in the bench area.

In 2011, the MLB created a 7-day disabled list for players with concussions. Clubs also must submit a “Return to Play” form to the medical doctor of the MLB to request a player be able to play after having a concussion, regardless of being on the disabled list or not.

In the 2013-14 NCAA (National Collegiate Athletic Association) Sports Medicine Handbook, the guideline for returning any student athlete back to playing is as follows:

-No activity – physical and cognitive testing

For more information on concussion treatment and awareness in the NCAA, go to ncaa.org/health-and-safety/medical-conditions/concussions.

ñRemove the student-athlete from play

For more information on the CCCAA concussion management guidelines, go to cccaasports.org/working/pdf/Constitution/E-Appendix_G_2013-14.pdf.