D’Albora not your average skipper 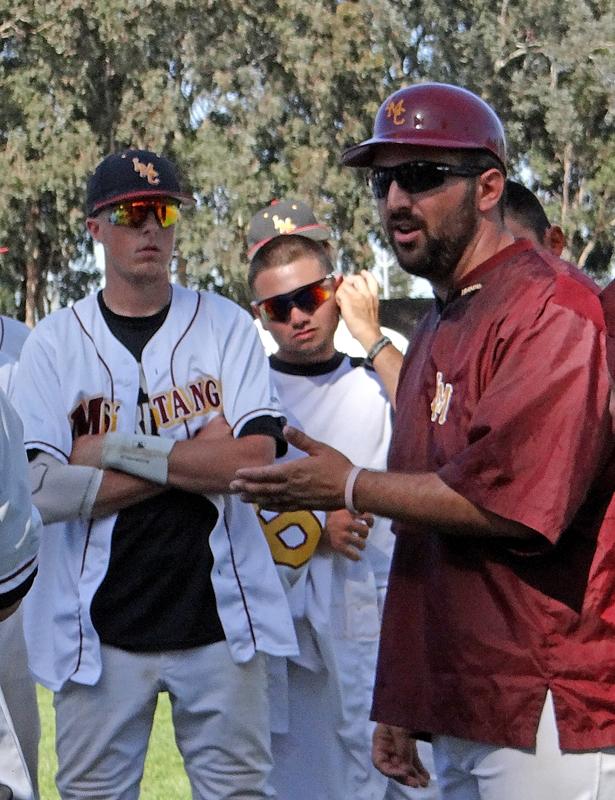 “For every ugly hair above my lip, hopefully there is a good deed that helped someone live a healthier life in some little way,” Los Medanos baseball manager Anthony D’Albora said.
This year, the coach who says his moustache “makes him look more Italian,” had his whole team participating last fall in what is known as “Movember.” He wanted his team to “pay it forward,” and help remind everyone that Movember is about doing the right thing and working toward giving people a fighting chance to live a healthy life.
At 27 years old, D’Albora is relatively young to be a head coach for a junior college, but his love of the game is what landed him the job.
“Baseball has always been my passion, and my goal was to be a professional baseball player,” D’Albora said. “I challenged myself every day to be the best player I could, and when I finally got to the point in my career that I knew this was not something I was able to do, I challenged myself to find the next best way to be great in this sport, to help others get as far as they could through the game of baseball.”
Growing up in Pleasanton, it is easy to see for people involved in baseball why D’Albora fell in love with the game. His alma mater, Amador Valley High School, is always a threat to win the North Coast Section title out of the East Bay Athletic League.
It hasn’t been the easiest path for D’Albora, however, as he had to climb the ladder in the coaching ranks to get the opportunity to become a head coach.
“The toughest challenge in becoming a coach at the college level is that you have to be patient and willing to sacrifice a lot when you first start,” D’Albora said. “Unless you are someone who played at a very high level there is a pretty good chance you are going to start as a volunteer assistant coach. This is something that is going to require a ton of time commitment and not a lot of money earned.”
D’Albora started as a volunteer assistant before becoming an assistant coach at Chico State University. He was in Chico for four years and completed his undergraduate degree in Organizational Communications before moving on to the University of San Francisco. There he worked as an assistant coach and the Director of Baseball Operations while completing his Master’s Degree in sports management. He spent three years working there before coming to LMC and spending one season as an assistant before getting the opportunity to become the head coach.
For D’Albora, baseball was always going to be a part of the equation. Before working toward playing and coaching, he had a lot of interest in broadcasting.
“I have always been pretty well spoken and really enjoyed the challenge of speaking in front of people,” D’Albora said. “Growing up I did things like speech and debate and competition civics, so talking about the thing I love more than anything else always seemed like a perfect fit.”
In school, D’Albora never considered himself a good sstudent. It wasn’t until college that he started taking education seriously.
“When I got to college I started to see that learning isn’t something you naturally have or don’t have,” the coach said. “I finished with a 3.8 GPA in my master’s program and I honestly believe I might have been the least intelligent person in my program but had the best work ethic. That is something I try every day to pass along to our players.”
Being around nine seasons of college baseball, D’Albora has been a part of several coaching staffs and has taken notes on different coaching styles.
Two coaches who have had the biggest impact on him so far has been head coach Nino Giarratano at the University of San Francisco and Greg Moore, head coach at Cal State Northridge.
“Coach G showed me what it takes to challenge players to become better people every day and see how that translates in to the way they play the game on the field,” D’Albora said. “Coach Moore challenges me every day to learn something new and do something crazy.”
The coach has had a hand in many memories on a baseball diamond. Even at a young age, D’Albora has been a coach of games with fantastic finishes.
“In terms of baseball I think my favorite memory is winning the West Coast Conference Championship in 2011 at USF,” he said. “I will never forget the feeling of celebrating and being a ‘champion’ with my USF Baseball family on that day in Spokane.”
On that day, Kyle Zimmer was on the mound “throwing his heart out” on short rest. Zimmer is currently a top minor-league prospect in the MLB.
Flashing forward to last year, which was his first season as the head baseball coach at LMC, the Stangs made the playoffs as the last seed. Taking number one seed Santa Clara to the brink, the team lost in a hard-fought series in the third game out of three.
This spring, the ‘Stangs will be looking to build off their successful 2013 campaign and possibly take state. With the help of a strong sophomore class, the goal is not a long shot.
“I like Coach D,” Freshman Joey Lyle said. “I think he’s a good coach because he doesn’t just make us better baseball players but also shows us how to be good people, and how to become successful in life.”