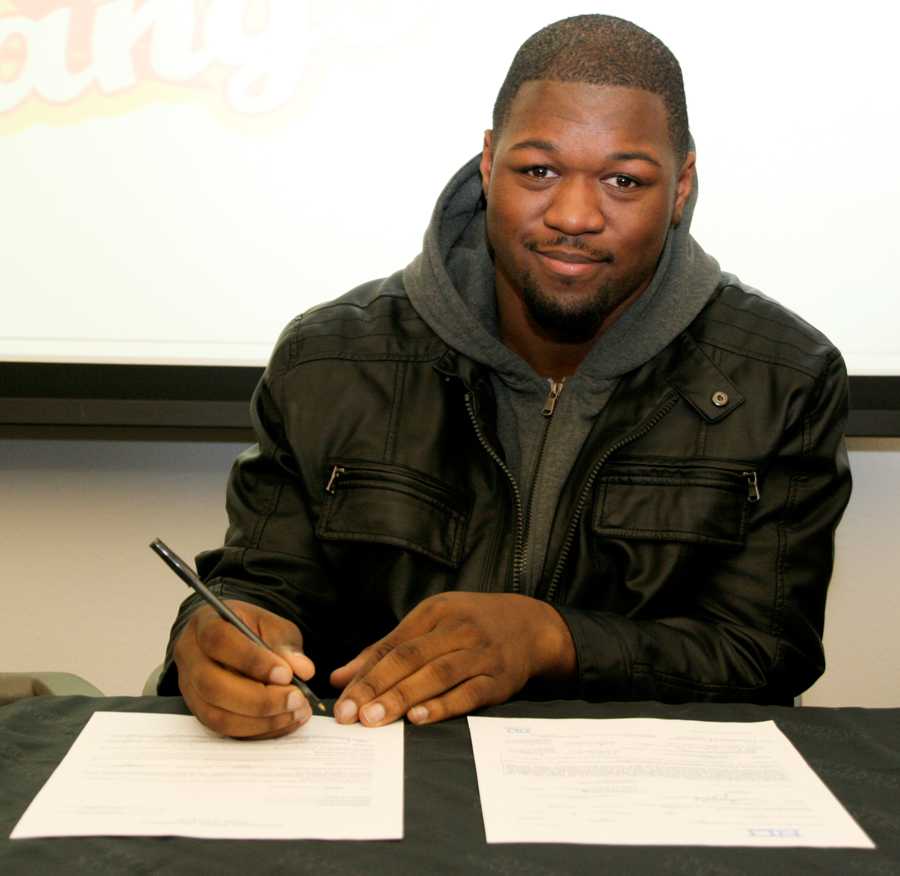 Alexander signs his letter of intent to Arkansas St. Photo By Cathie Lawrence.

Roughly 70 people assembled in the Library Community Room L-109 to honor defensive end Charles Alexander and other Los Medanos College football players on National Signing Day, a tradition among football teams to announce the names of the four-year universities where their players have signed on to attend and play ball.
Alexander signed a Letter of Intent committing to play for Arkansas State.
Sitting alongside his family at the front of the room, Alexander remained calm while his coaches gave praise for his hard work and dedication to the team and to LMC.
Alexander signed his papers at 7:30 a.m. Wednesday morning. He was just one of two junior college signees from a total of 25 players that were signed to Arkansas State on Feb 5.
“It’s an awesome opportunity to see guys do what they’re supposed to do, not only on the field but in the classroom,” said Head Coach Chris Shipe. “He’s a really good football player.”
Quarterback Coach Dave Fogelstrom might have put it best when he said to Alexander, “I know the quarterbacks won’t miss you.”
Alexander’s signing came after two visits from the coaching staff of the Arkansas State Red Wolves; first by the defensive coordinator and then by both the defensive coordinator and the head coach.
Other signees from Los Medanos College include: running back Shawn Vasquez who signed to Texas A&M Kingsville, offensive lineman Garrett Louis who signed to Humboldt State, wide receiver Jermaine Sims signed to McPherson College in Kansas, linebacker Jacob Catala signed to Benedictine College also in Kansas and running back Robert Ortiz, who signed to Western Oregon University.
All of these players could not attend the event because they are all already attending their respective colleges.
In regards to what can be looked forward to for next season, Shipe said “hopefully we can line up and do something straight.”