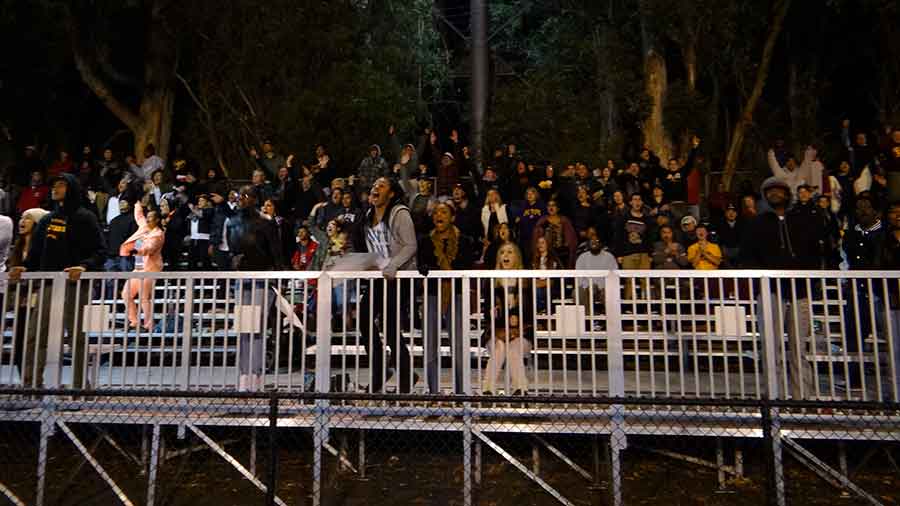 The Mustangs fans go wild as LMC made many great plays on both sides of the ball all game.

I went to San Pablo to watch the Los Medanos College Mustangs play the Contra Costa College Comets play their final game of the season and the winner would be guaranteed at least a co-conference championship.

It was probably one of the best games I’ve ever attended on all levels. Being that I went as a fan, I was able to root and be loud and have a blast. The game bounced back and forth and was full of excitement.

The game’s atmosphere was energetic and there was a lot going on. Both crowds went wild whenever their team scored.

LMC scored first and the Mustang stands went wild with excitement. I was thinking that LMC was going to score early and often and blow out the Comets.  However, a couple of fumbles changed that and CCC scored to jump on top. LMC answered right back with another touchdown. CCC retaliated even quicker and scored yet again. Yes, it was that kind of game. At halftime it was 13-12 and both teams knew that either side could win this game.

On top of all that, the game was filled with penalty flags. The yellow flags were being thrown around faster than a keg at a frat party. There was even a flag before the game that affected the kickoff from the Comets. There were even three ejections from the referees who seemed to enjoy what they were doing. (Two for LMC and one for CCC) Obviously, the refs didn’t have their bowl of Wheaties that morning because they all seemed bitter and were taking it out on the players.

I, as well as the rest of the LMC crowd were getting frustrated with all of the flags. I even heard a parent say, “My daughter is tougher than you referee.” While I found that extremely funny, (I actually was laughing), it clearly showed the frustration of the crowd.

When the second half began, LMC came out and played tough smash mouth football and the fans loved it. They were roaring with excitement, hoping to see the Mustangs pull off a victory knowing they struggled this season on the road.

The third quarter was mostly quiet except for one hit towards the end of the quarter. Marcus Fenderson of LMC hit the Comet quarter so hard that I swear he was lying horizontally in the air for a couple seconds. I was really surprised he stayed in the game after getting his bell rung like that. Naturally, after a hit like that the QB fumbled and LMC recovered it and the crowd was going nuts. That one play really set the tone for the forth quarter and helped lead to an LMC victory.

There was not a single dull moment in the final quarter, where four touchdowns were scored. It was like watching an epic chess match except with hard hits and scoring.

There was a fan walking back and forth and waving the Pittsburgh Steeler’s famous Terrible Towel and getting the fans amped up. It worked and the crowd began shouting “LMC, LMC, LMC!” I could tell that the parents and fans wanted the victory almost as much as the players.

When LMC’s Jamal Lockett ran back the kickoff late into the game it had two effects. It sparked the LMC crowd even more and at that point the Mustang fans were as loud as I heard them all night. On the opposite of the field you could hear a pin drop on the Contra Costa side. The kickoff return back really deflated the crowd and players.

The Comets would score one more time, but ultimately it wasn’t enough to silence the LMC crowd and come away with the win. Once the clock hit zero and the Comets’ fate was sealed, the LMC players attempted to dump Gatorade all over their head coach Chris Shipe.

After the game, I ran onto the field to congratulate the players and I could feel the difference in attitudes from both coaches. Shipe was the happiest I have seen him, while the Comet head coach was furious and yelling at his team. It was a great feeling to represent my school and take part in the celebration.

This game was nail biting to the finish and I loved every minute of it, it was one of the best games of LMC sports that I was able to witness.