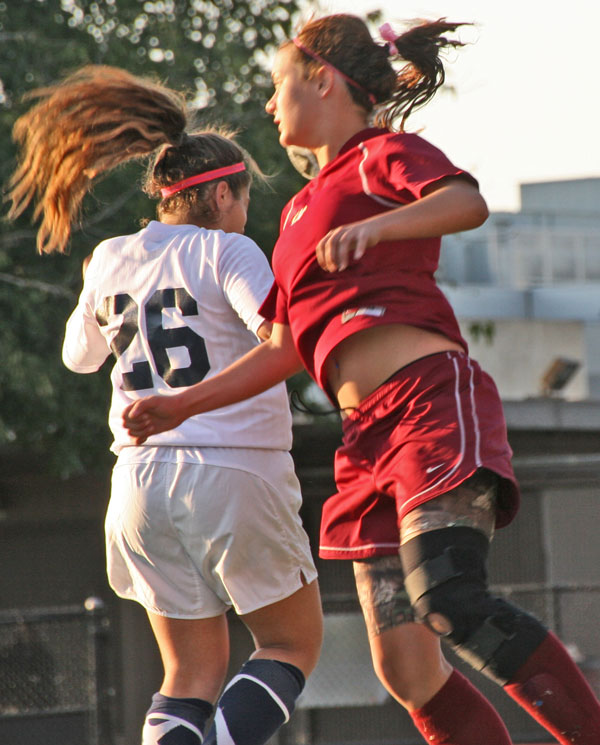 LMC's new addition Lauren Ayers goes up for the ball over a Contra Costa defender in a final second loss.

The Los Medanos Mustangs soccer team played tough on Tuesday in a contest against the bitter-rivaled Contra Costa Comets, but another last minute goal was the game changer.
The first goal of the match came within 20 seconds of the final whistle and left the Mustangs with no hope.
“So frustrating,” LMC’s forward Alexia Trezza said. “No words for that goal.”
The goal came in the 90th minute with a great play from CCC’s forward Laura Hurtado. “Now or never” are the exact words Hurtado told her teammates when she heard the call from the referee for the last two minutes of the game.
The Mustangs fell apart defensively in those last two minutes. Trezza felt that Hurtado pushed a defender down right before scoring and that referees lacked attention throughout the game.
Despite the last minute goal, the game was up for grabs for both teams. Both played strong defensively, desperate to leave with a victory.
In the 45th minute of the game, what seemed to be a goal for the Mustangs was ruled a
no goal by referees due to a player being offside.
LMC Head Coach Mark Bryant refused to comment after the game.
The lady Mustangs had recently picked up two consecutive wins before Tuesday’s loss, after nearly two complete seasons without a victory.
The soccer team will travel for a game against Solano College tomorrow at 3:30 p.m. in search for another win as the season is nearing its end.
The Mustangs sit at 1-6-1 in conference and 2-12-1 overall on the season.