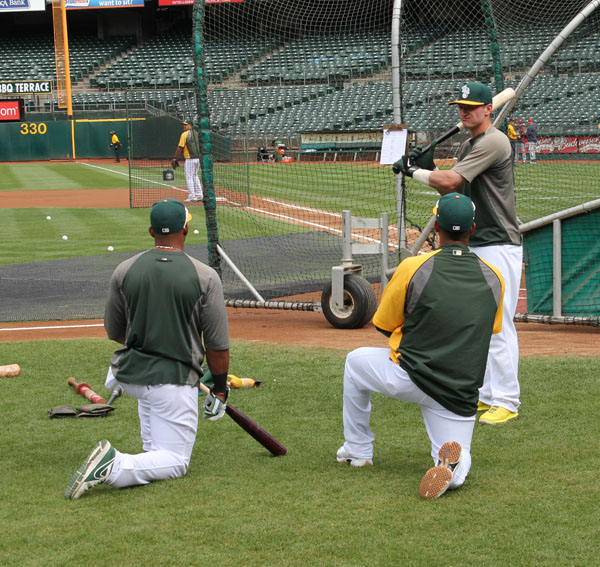 Everybody has dreams and expectations of what they want to do with their future. Some of us want to be superstars in sports or in Hollywood while others want to impact their communities by entering the law enforcement field or teaching the students of the future. It’s not every day that you get to live out what you want to do in your future. Thanks to the Oakland Athletics, I got that opportunity.

Being a journalism major and a huge sports fan, my dream job is to work covering a major league sports team.

On Friday Sept. 20, the Oakland A’s gave me an opportunity to live out a part of my dream.

After speaking with Debbie Gallas of Media Relations with the Oakland A’s, I was given a press pass to cover the National Anthem as performed by the LMC Concert Band.

The press pass was a photo pass so that pictures could be taken on field during the National Anthem.
I had no clue what a photo press pass meant, but after arriving at O.co Coliseum I soon found out. A photo press pass allows you to roam anywhere around the stadium and anywhere on the field, but as a photographer you are not allowed into the locker rooms or the press box.

Being on the field I was able to sit in on the interview of manager Bob Melvin.

Melvin was sitting on the bench in the dugout when he began taking questions from reporters who were circled around him. I was pushed to the back as the more experienced journalists pushed in with recording devices in hand.

During the interview, Melvin answered questions about the struggles of Closer Ryan Cook as well as revealing that rookie First Baseman Nate Frieman has been dealing with an oblique injury that has kept him out of the lineup.

Shortly after the interview broke up, Melvin walked over to the field where he watched his players take batting practice and also began hitting balls to his infielders as they took practice, fielding grounders.

During this time I stood back and took pictures because all of the reporters retreated to the locker room to await the players as they came in from the field.

Afterwards, the A’s staff began bringing fans on field for the on field batting practice, the first being Hunter Kilbourn who was attacked by a pit bull while visiting a friend in Antioch, CA. The Oakland A’s brought him on field and in a touching moment he was introduced to A’s Right Fielder Josh Reddick, one of his favorite players.

From that touching moment, batting practice continued and soon switched hands to the Minnesota Twins.

After the A’s and Twins took their turns on the field, both teams returned to their respective clubhouses while I watched the grounds crew prep the field and tear down the protective equipment from batting practice.

Soon the players began returning to the field, stretching in the outfield, and before I knew it the event I was here for in the first place began. The LMC Concert Band came in for their chance to entertain the fans.

The performance went off without a hitch and the crowd of 36,000 plus roared in approval as the band exited through the center field fence.

Since I only had a photo pass, I had to leave the field after the performance was over but the experience stayed with me long after I left the field.

If you ever have the opportunity to do something you have always wanted to do, don’t hesitate because you may just have the time of your life, I know I did.