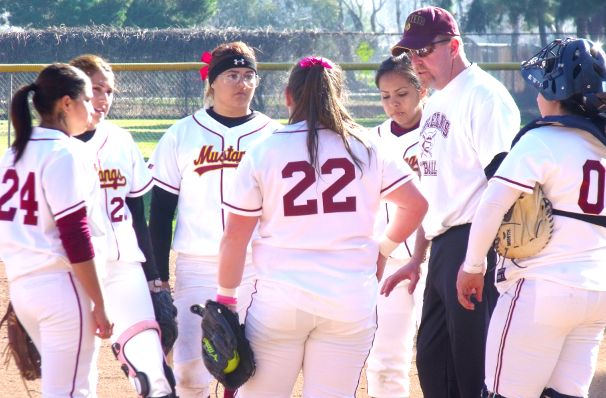 Despite finishing 5-19 in conference and 12-28 overall, the Mustangs softball team looks to bounce back next year and come out on top.

Los Medanos College enjoyed having a softball team after lacking one last year. Naturally, putting a team together in one season is no easy task, yet head coach Tim Griffith was able to get a team that could compete with the rest of the Bay Valley Conference.

The season was a building year, as the Mustangs worked out kinks and the team bonded throughout the season.

“We spent a lot of time moving player’s positions around and getting a feel for where everyone best benefitted the team,” said pitcher Jenna Leavitt. Outfielder Vanessa Laxa added, “we had our ups and downs, but it was a learning experience and we will come out tougher next year.”

The season was seen as successful even though the team was below .500.

“I would define this season as being far better than I had anticipated but not as successful as I had wanted.

For the first season of LMC returning to play, this was a fantastic achievement for the girls,” said Griffith.

It was successful in more ways than one; the team was able to build chemistry and bond to come back for next season.

“Even though our record didn’t show it, we grew a lot as a team throughout the season,” said Leavitt.

In such a short time the team came together and was able to hang with the top team. Many of the players have never played together and this was their first year under the leadership of Griffith.

“They had to learn a new coach and a totally new program. It’s much like trying to dance with someone when you don’t know the steps yet. They learned quickly and next year we will have returners that can lead the way,” said Griffith.

Along with bonding, the team shared memories and enjoyed the season. “I think we did the best we could and even when we were losing we kept our heads up. No matter what out team stuck together,” said infielder Monica Ibarra.

The team felt jolly and everyone got along. Ibarra talks about how the team was always laughing and joking around with one another.

The Mustangs will take next season by storm, especially with the new recruits and the returning players.

“We have signed some excellent players for next year, they they are experienced ball players and will add a new dimension to the team,” said Griffith.

Not only is the team as a whole excited to play on the diamond but individual players such as Leavitt are looking forward to next year.

“I look forward to seeing my teammates again and with the new group of girls coming in hopefully surprising a lot of teams,” said Leavitt.

LMC has team goals as well as individual goals. Griffith admitted that there is room for improvement.

“Two things we need to work on is our overall conditioning and base running. We got into scoring position easily but could not cross home plate often enough. That has got to stop,” said Griffith.

Leavitt has her goals set high, as she plans to return as one of the aces for the team, “I would like to set and exceed personal goals with my pitching.”

While the season had both high and low points the returning players are hungry for victory next season.

Laxa talked about getting wins and focusing on softball.

As the Mustangs plan to take what they learned this season and take the conference by force next spring, Griffith continues to enjoy his job as the head coach and loves to see his players’ progress.

“Watching the players make daily strides in their ability is one of the big dividends I get from coaching,” said Griffith.