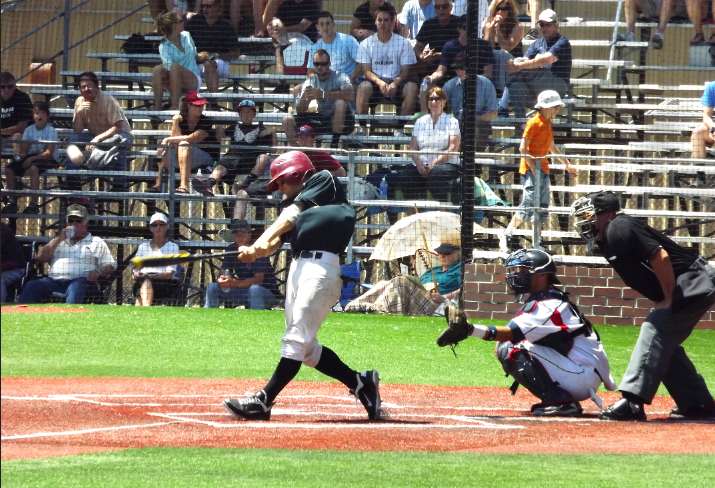 The LMC baseball season ended Saturday with heavy hearts as they lost a best of three games series to the one seed Santa Rosa Junior College Bear Cubs. LMC was triumphant in the first game of the series Friday, winning 5-3, but lost a doubleheader the following day 4-2 in 12 innings and 5-4 respectively.

Friday’s win featured LMC ace Peter Nyznyk giving up 10 hits and two walks, but went seven innings allowing only three runs and getting the win with Jacob Jones and Wyatt Foreman coming out of the bullpen behind him each tossing a scoreless inning.

Game two was a true pitchers dual as Jason Alexander from Santa Rosa went nine innings giving up two runs while striking out eight. LMC’s Ben Polansky matched him well while throwing seven innings of two run ball. Santa Rosa struck first in the third as their designated hitter Taylor Martin singled with two outs to score the games first run. LMC countered in the fourth with two RBI singles by Christian Kaplan and Matt McHenry. At that point it seemed like the LMC was ready to keep scoring, but they were stifled by Alexander and JJ Jamerson who came out of the bullpen and pitched two scoreless innings.

Logan Overly came in for LMC after Polansky exited and pitched four great innings, the first three of which he did not give up a hit. In the eleventh inning however, a couple seeing-eye hits and an error at second base saw the Bear Cubs score twice and go on to win the game.

In game three, Jacob Jones, who had not started a game for LMC the whole year, faced off against Brian Bynum. Jones, who normally comes out of the bullpen was able to keep LMC in the game going three and a third innings while giving up three eared.

LMC was in need of a spark late in the game was they were down 4-1 heading into the seventh inning. They got that spark and scored three runs, all with two outs. Ryan Lacy hit an infield single that scored a run with the bases loaded then Christian Kaplan laced a single to right that scored two to tie the game which absolutely fired up the LMC bench and fans watching in the stands.The tie did not last long though as Santa Rosa scratched a run across in the eighth, aided by a controversial call by the home plate umpire.

With runners on first and second and none out, Peter Nyznyk pitched to a bunting batter that looked like he offered at it and hit it foul as the ball went to the backstop.

The call was that it was a wild pitch and the runners moved to second and third. A sacrifice fly brought in the fifth run of the game for the Bear Cubs as they won the game and series and now move on to the super regionals.

Talking about the pitching in the second game, LMC head coach Anthony D’Albora said, “For Peter to come back and make pitches there and get an out for us, that’s heart right there. The kid was tired. Overly was ready to come back out for us. Jacob Jones didn’t start one game all year and he gave us a pretty good one today. It doesn’t go to talent or skill or physical ability, it just goes to the type of heart and the type of kids that they are and I’m pretty proud that those are our guys.”

The scene at the end of the game was one of heartbreak, as LMC was mightily close to dethroning the one seed as the 18 seed, but came up just short.

The sophomores on the team who had played their last game as an LMC Mustang embraced other teammates and coaches and relished in what they had accomplished, despite the loss.

Talking about the season as a whole, D’Albora said, “Regardless of the score today, I’m proud to be apart of LMC right now and I hope our guys are too. We showed up and no one really gave us a chance. Today I think we were a great team. As a coach I am excited to brag about the sophomores who go to do great things and can lie and tell them I told them everything they know. I think what we did this weekend will help build something special for a long time at LMC.”

Santa Rosa head coach Damon Neidlinger said, “Los Medanos College was well represented by the class and effort in which the team competed. It was a great and hard-fought series on both sides. I congratulate LMC on a great season and a great team effort over the weekend.”

Christian Kaplan summed up the togetherness of the team throughout the year and said, “That was my favorite team I have ever played on, I just love this team.”