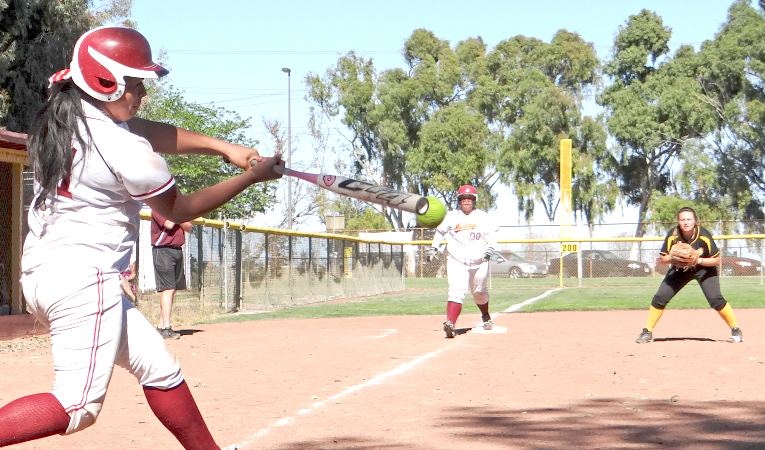 An abundance of runs were scored by the Marin College Mariners in both games of a double-header when they came to Pittsburg to take on the Los Medanos College Mustangs.The Mariners took both games of the double header, winning the first game 9-0 and the second game 13-3.

“Our bats were hot, we were seeing the ball and hitting it,” said Mariners pitcher Sammy Schillings.The Mariners came out hot in both games. In game one they were able to score at least one run in every inning, while in game two they scored five in the first to set the tempo of the game.

“It was nice to get a run every inning,” (in game one) said Marin head coach Nina Richardson.

The Mariners controlled both games with solid pitching from Schillings, who just recovered from an injury and were able to benefit from the Mustang’s errors.

“They capitalized on our mistakes as a good team should,” said LMC head Coach Tim Griffith.

After both games, Griffith admits there is room for improvment.

“We played good, but we didn’t keep our heads up,” LMC Shortstop Kristen Misquez said.

While the scores may not reflect it, there were bright spots in the day for the Mustangs. Outfielder and pitcher Jenna Leavitt drove in two runs with a double in the first and later scored on a passed ball in the fifth contributing to all three runs LMC scored on the day.

Griffith thinks that the strong point of his team was the pitching. The score doesn’t reflect it, but “pitching was fantastic, they were brilliant,” Griffith said.

Even though the Mustangs sit at with an 8-20 record, the team has still been playing hard under the leadership of Griffith.

Richardson noticed the hard work of the team and Griffith.

“Coach Griffith has done great things with the program, we love to see positive coaches, we are glad to have them in conference,” Richardson said.