LMC football is springing into action 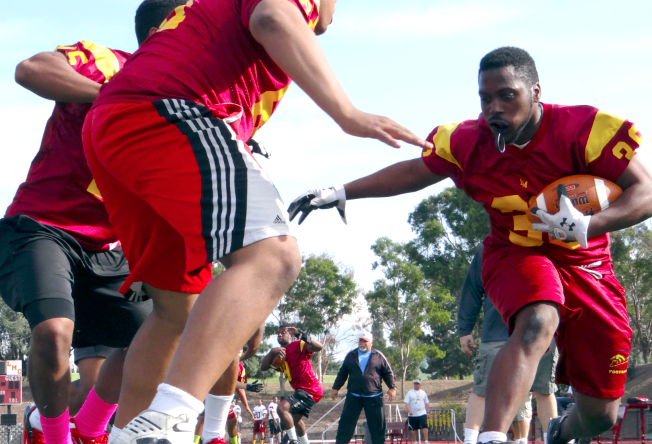 The teams hopes to improve on last year’s 6-4 record and aim to make the playoffs.

“We definitely expect to improve from last year and definitely try to win a conference championship and bowl game,” said Shipe.

A goal is trying to win conference, “defense should be better next year,” said Defensive end Siosifa Malolo.

There are no cuts during spring football as Shipe and his staff want to see all of the talent and give everyone a chance.

Players have both individual and team goals. Some of the goals are to get some playing time and be undefeated said first year running back Dominik Buckner.

The team has lost some key players such as wide receiver Terrance Polk and quarterback Michael Behr to replace from last years squad but Shipe said one of the reasons for spring football is to try to replace players like that as well as “putting an emphasis on bigger, faster, stronger.”

Malolo admits that it will be hard to replace the QB position.

The team is not allowed to be in pads and make full contact until August said Shipe, but that is not their main concern, even though some of the players don’t like it.

“I don’t like that we can’t hit or be padded up,” said Malolo.

The main purpose of spring football is to get in shape and learn the playbook, especially for the first year players.

The team has strong focal points and plans to use them to their advantage. The defensive line will be one of our strongest assets said Malolo.

Buckner said that the running backs will be the heart of the team, especially since there is an abundance of them, who will all share time.

Shipe has had no problems with the team and “likes the commitment from the players.”

The Mustangs continue to work hard and look to take the upcoming season by force and aim to take the conference in 2013.