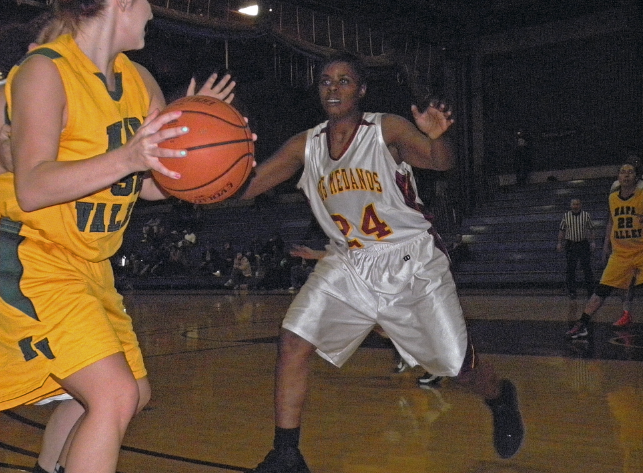 The Los Medanos Mustangs women’s basketball team hosted the Napa Valley Storm for the season finale ending in a 66-56 loss.

Both teams played well in their perspective aspect of the game. Napa Valley shot 3-pointers well, while LMC was able to dominate inside the paint, but in the end it was Napa Valley who out played the Mustangs.

“Tonight, we shot well. I hit a lot of shots which helped to our victory,” said Napa Valley guard Sara Irvine. Napa Valley head coach Vinnie Shaw added, “one of our strengths is shooting the three,” the girls were ready to play.

“We played [well], we came out to play since it was our last game,” said Irvine. The entire game the Napa Valley bench could be heard through the stadium as they cheered on their team to victory. Shaw adds, “we played together and played tougher, we kept composure and fought.”

Napa Valley was also great defensively and was able to hold LMC to just 56 points considering the last time the two teams faced off, Napa Valley gave up 62 points. “Defensively, we were solid, tough man to man, even though we got into foul trouble we adjusted,” said Shaw. Irvine added, “we had a lot of stops out a new and revived team, and kept putting the pressure on the Storm, trying to mount a comeback. LMC came out with crisp passing and was hitting shots. At one point the Mustangs were only down 45-44.

Despite the efforts by LMC Napa Valley responded on a 21-12 run to end the game. “We just settled down and stuck to our game plan, they responded to the run,” said Shaw.

Despite the loss LMC still impressed their opponents. “They came out to play,” said Irvine. Shaw added, “They played hard, they didn’t quit and kept fighting.”

The Mustangs wanted to close out the season with a win and were disappointed with the loss. “We should have won, we had them” said LMC forward Meleika Fountila,

Despite missing the playoffs the Mustangs are looking to come out next year with a more experienced team and change that.