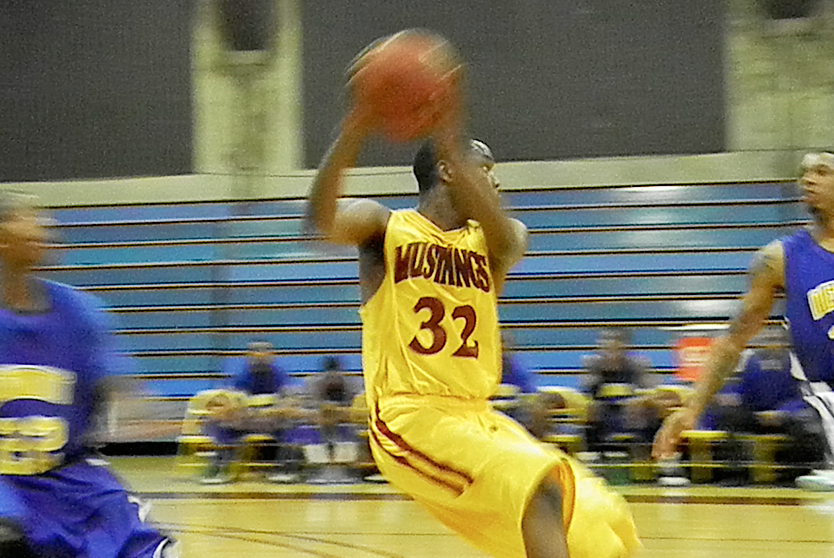 The Los Medanos College Mustangs men’s basketball team hosted the Merritt College Thunderbirds Wednesday night for what was supposed to be a one-sided game, but ended in being a tight contest until the final moments of regulation where the Thunderbirds closed it out 88-80.

“I didn’t expect them to keep up with us like that,” said Merritt point guard Anthony Knight. “I expected us to get up early, [and] to have a 10 point lead by half time.”

Merritt shooting guard Delvon Nisby’s 31 points was one of the key factors to the Thunderbirds’ victory. Nisby heated up late in the game with 21 of those points coming in the second half.

“It’s all about heart. We gave up in the last five minutes,” said small forward Juan Carlos Olsen. “That’s been our problem the whole season. We play really hard for 35 minutes, and then we give up because we aren’t mentally strong enough in the last five… Gotta finish it off.”

In the beginning of the game, LMC was reluctant to dribble with the on coming pressure of Merritt’s full court man-to-man defense. With the Thunderbirds running away with the lead the Mustangs were forced to take a time out with the score at 16-7.

The Mustangs came out rejuvenated ready to fight after the timeout, and picked up the pace by feeding the ball to the hot handed shooting guard Nick Blount and point guard Kelse Jones. The two combined for 41 points at the end of the game, and were able to catch up in the middle of the first half that consisted of five lead changes.

LMC played strong defense in the final 3:30 of the half by not allowing the other team to score, and went into half-time trailing 38-34.

In the second half the Thunderbirds continued to play physical, and Blount felt it. The small forward took a beating and reinjured the wrist on his shooting hand. Although shaky at first he was able to recuperate and finish with a successful performance.

The LMC crowd was pumped with the game going back and forth and the Mustangs were constantly knocking down 3-point-shots.

With back to back exciting plays on the offensive end, consisting of a shot clock buzzer beating 3-pointer by Jones and an around the back pass from point guard point guard Justin Smith to small forward Javon Primus for a go ahead jam, had the audience going nuts and made Merritt Head Coach Keenan McMiller take a time out. LMC was looking at a 59-62 lead with less than nine minutes to go.

The Thunderbirds came out of the time out with more intensity, and put up a 17-4 scoring run squandering any hopes of an upset.

“As long as we come out ready to play, we are going to be in every game we play,” said McMiller. “We did a good job of contesting the 3-point shots. That’s the key when you play Los Medanos this year.”