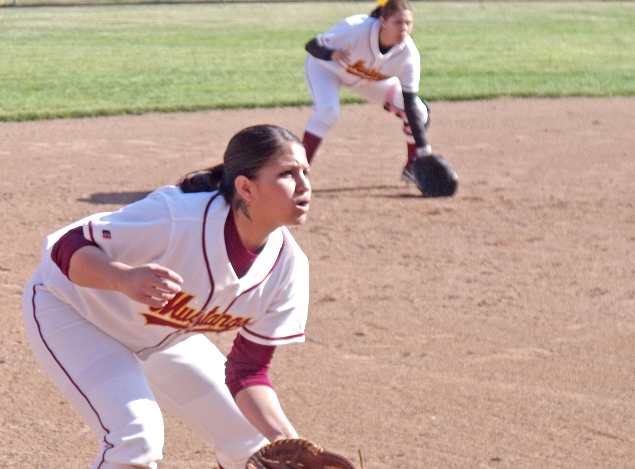 The Los Medanos College Mustangs took on the Foothill Owls in the first game of a double header on Thursday, but lost 14-2 in a five inning game.

The Mustangs came out shaky the first two innings after giving up 10 runs. The second inning is where most of the damage was done when the Owls scored eight runs.

After that, LMC got their act together and only allowed four runs the rest of the game.

Despite the loss, LMC impressed players and coaches, especially because of how well the team played from the 3rd inning on. Foothill head coach Collin Pregliasco said “LMC looked good,” they made a lot of hard outs, and their pitchers got ahead in their counts, overall they had few mistake on the field. Foothill pitcher Amelia Vivo added “they have a lot of potential.”

Even though LMC never had a lead in the game, the team never gave up and fought until the very end. Third baseman Kristen Misquez said, “We didn’t put our heads down just because we were behind.”

LMC pitcher Michelle Gorman said “We played good defense in the second half of the game.” Going into the game LMC head coach Tim Griffith knew that it would be a tough game. He said Foothill is a top-notch program. He made sure to get us into games that would “test our ability.”

One of the stars of the game for LMC was pitcher Jenna Leavitt who pitched in the third and fourth innings and was lights out. Leavitt said about her performance that she just goes out there and does her best to “hit my spots.” Griffith added that she was “outstanding.” While Vivo said she “had a lot of movement” and was excited to face her again.

In the second game the Mustangs lost 9-0 but still look to bounce back, but the team admits that there is still much work to do looking forward. Gorman said, “ we need to work on defense and situations. Misquez added that they cannot give up on the ball and “give up on the inning.”

Griffith said they have to overcome the losses. He sees that his team is hungry to win and the challenge of overcoming the slow start is whether they will “rise to the challenge or will it be to much? They want this.”