Baseball ready to bounce back after close series 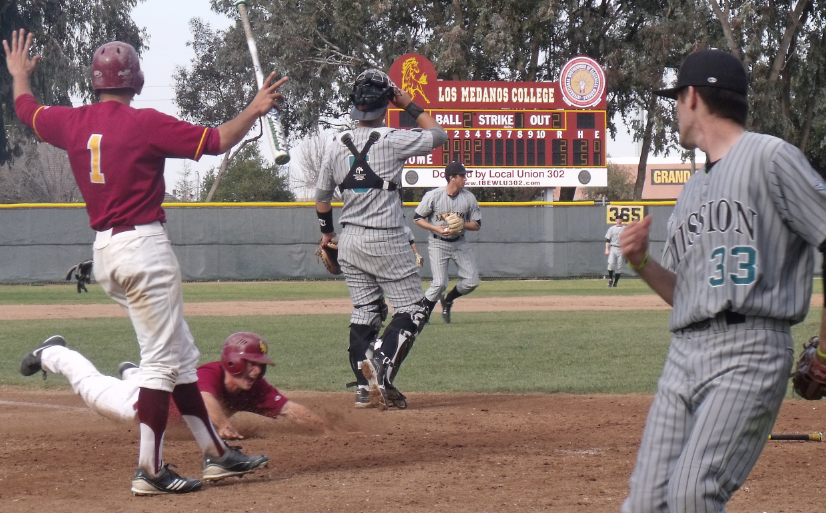 Los Medanos College’s baseball team has had their sights set on a state championship all off-season, but currently find themselves with an 0-2 record after two close games against the Mission College Saints, losing 8-6 last Friday at Mission College and 6-5 at home Saturday.

“Our plan is to win every game. We did not win today, but I thought we competed our butts off, which is something that every guy can hopefully take away from the game,” said LMC Head Coach Anthony D’Albora after Friday’s game.

Mission jumped out to an early lead in the first inning Friday, scoring three runs on four hits, aided by a walk, and a hit batter.

LMC battled back but were only able to put single runs up on the board until the ninth inning where they scored twice after two quick outs. The rally was thwarted after a runner was caught stealing for the final out of the game.

D’Albora said the team competed well, from the starters to the substitutes, and that they did not play good enough defense.

“There were routine plays that we couldn’t handle that maybe cost us two or three runs. In a two run game that is really the difference,” he said.

On Saturday, LMC scored five runs in the first four innings, but could not put any more runners on base until the bottom of the ninth. It proved to be too little too late as they could not contain Mission’s bats, giving up two runs in each of the fourth, fifth, and eighth innings.

“For the last two games we were good, but our challenge is that if we want to win, we have to be great. Nobody is going to come and give you a win,” said D’Albora after the game.

Mike Perez, head coach of Mission College, said he liked how his team performed but also how good of an offense LMC displayed for the two-game series.

“LMC was a great offensive team. They are very physical and I wish we had some physicality like them,” he said.

Perez was also impressed with how his team battled back after being behind in the second game.

D’Albora and his coaching staff were pleased at how some of the freshman, such as pitchers Ben Polansky, Nick Valle, and Jacob Jones played. D’Albora said now that the first weekend is over with, he hopes the guys can “free up their nerves” and take a “sigh of relief” and show up to the next game ready to play.