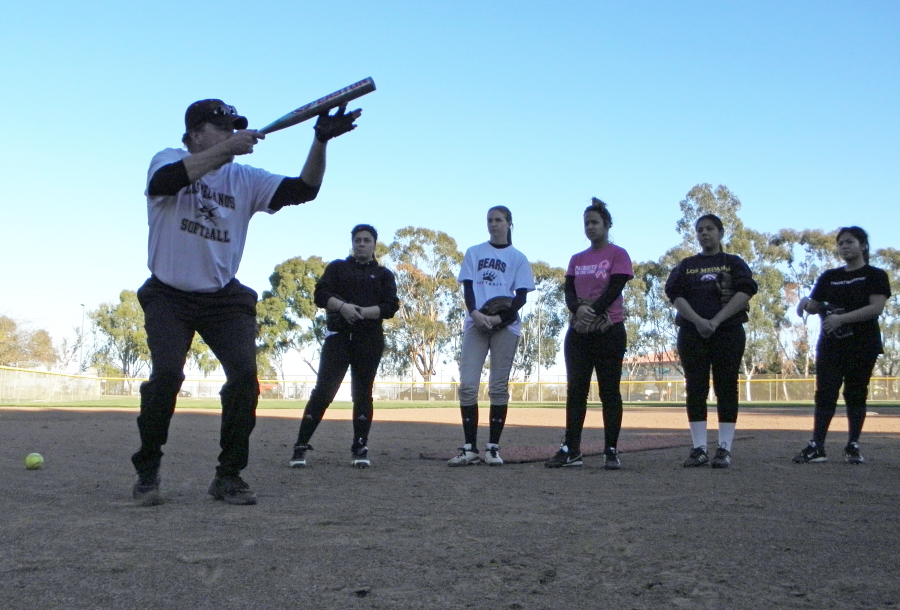 The Los Medanos College women’s softball team looks forward to the start of their upcoming season.

After not having a team last season the players can’t wait to get back out on the field and play ball.

Third basemen and shortstop Kristen Misquez adds that she is excited for friendships, memories, and most importantly winning this season.

The team is filled with characters that all bond well together. Velasquez said that for the short amount of time that the team has been together, “we all click.” Lauren Townsend, pitcher and catcher, added that the she feels they all get along with each other is a strength to the team.

During practice the team was laughing and joking, but at the same time working hard and communicating, which shows what kind of personalities are on this team.

The team is led by experienced coach Tim Griffith who takes charge of his team and leads by example when necessary and also pays attention to the small details. He recognizes he has a good team but at the same time knows that there is still room for improvement.

Griffith said that the team has a “tremendous amount” of talent and if the team works together they can be a powerful team. He adds that his team is very smart, knows the game and executes well, “which leads to good decisions.”

The Lady Mustangs have good chemistry, communication, play smart, and are very adaptable. Jenna Leavitt, pitcher and outfielder said we all have positive attitudes, “we get along well.” This team can play to its advantages and get out of a jam if needed. Townsend added that the team is adaptable to many situations, rather than being a one-sided team.

Griffith said that they are a diverse team they have “speed, power, skill, and experience,” which is rare in a young team.

Although the team has many strengths many players admit that there is still much to improve on. Griffith said “that he would like to have more power in the lineup and eventually have the whole lineup hit for power.” Misquez added that although we communicate well, I think we can improve and communicate better.

Since the players have been together for such a short time, the positions are not set in stone. Leavitt said because we are just coming together as a team we need to “figure out what positions we play best” to help the team.

Griffith doesn’t expect one player to take charge but he expects the entire team to lead by voice and by example of how they play on the field, which speaks to the character of the team. He said “I expect everyone to have leadership roles, and they have proven themselves already.”

The team doesn’t have a set rival, but in their mind, every team they face is a rival. Griffith said thats because of the year off, nobody is quite sure of the talent of the other teams and looks forward to taking on all the teams on the schedule.

When this team comes together both mentally and physically they can do damage. With their combined adaptability, team leadership, chemistry, and communication, this team has the potential to go far.

Leavitt said there are still some things we need to work on but “we will surprise a lot of teams.