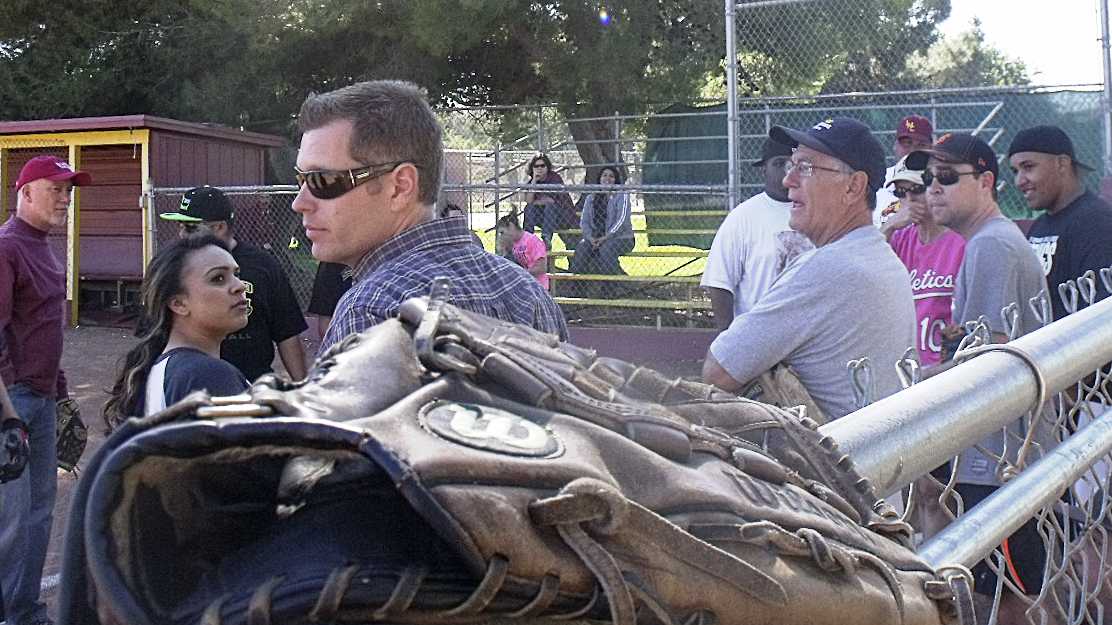 The warm muggy air of a fall afternoon provided the right conditions for the bi-annual faculty softball game on Oct. 19. A little over 20 players were divided up according to their favorite ball club—the Giants or the A’s—for the game that started just before 2:30 p.m.

Employees throughout the college, from the president’s office to buildings and grounds, played alongside each other, providing an opportunity to cover all bases of the LMC staff filled with fun and healthy competition. The winner of which gets to be crown “victory” until the next contest.

“Bragging rights… we give each other a lot of grief depending on who wins and who loses, and who makes good plays and who makes a lot of errors,” said Bob Estrada LMC bookstore manager.

Estrada, who was acting team captain for the LMC Giants elaborates on why he likes playing in this pick-up game, “It’s just a lot of fun, it’s a great way to blow off steam. It’s a great way to interact with coworkers in a different way.”

The game has been held for at least 14 years, recalls captain of the LMC A’s Elaine Ortiz computer and network service specialist. Ortiz is one of few who organizes the event to brings the staff together.

“It’s always a good time; it’s a beautiful day and it’s a close competition… it gives us something to talk about for a little while,” said Ortiz. “It’s a good team building event and we have a good time… I just think it’s a good event for the campus.”

The 7 innings went by with a flurry of big hits. Multiple homeruns from each team had the lead going back and forth ending in an LMC Giants win.

With the success of the real Giants this may undoubtedly cause for extra roasting for the LMC A’s fans in the coming weeks around campus. A notable homerun – the longest of the day – hit by Rashaad McAlpin sailed over both fences that outline the softball diamond and landed somewhere in a grove of eucalyptus trees.|

President Bob Kratochvil took a few swings with the bat and played in left field for his first go around in the LMC staff softball game and walked away with a positive experience.

“It really created a lot of camaraderie… people really came together and had a lot of fun. And so it helped alleviate a little bit of angst, I think, about what’s going on and it was just nice getting together on a field other than the academic field,” said Kratochvil.

The next chance you will be able to see the staff take to the softball field is some time in the spring semester.