LMC slipped into an early rut against Mendocino, 56-34 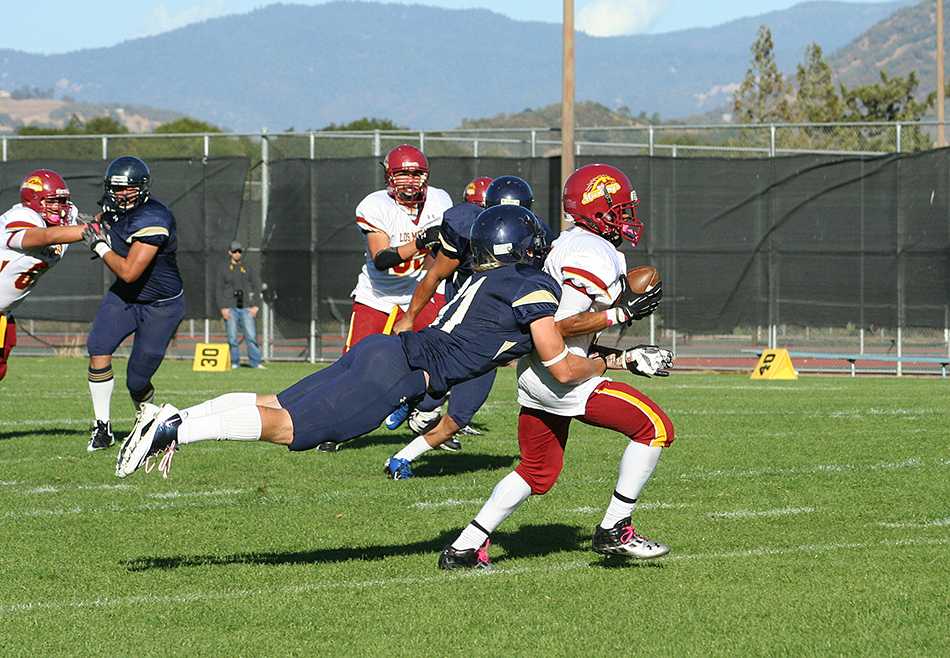 In a battle that was featured as a hotly contested contest between the Mustangs’ high-powered offense and the Eagles’ strong defense, Los Medanos College faced off against Mendocino College Saturday, Oct. 20 in Ukiah. In spite of being armed with an explosive offense led by a fierce rushing attack, the 4-2 Mustangs were outmatched and outplayed by a hungry and determined 2-4 Eagles team, losing 56-34.

“It didn’t feel too good,” said Mustang wide receiver Terrance Polk immediately after the loss. “As a team, we didn’t execute on both sides of the ball like we were supposed to.”

The Mustangs found themselves on the wrong side of a 21-0 deficit early in the first quarter, as Mendocino quarterback Kyle Harmyk twice connected with wide receiver Aaron Dhuyvetter with two touchdown passes, the second of which was a 95-yard catch-and-run.

“That reminded me of all the big plays our offense has scored in the past,” said Mendocino Head Coach Mike Mari. “I have been at Mendocino College since 2004, and we have had a ton of success. It was nice to see that play go.”

Down early 13-0, and already having trouble moving the ball, the Mustangs fumbled the ensuing kickoff, allowing good field position for the Eagles. Five plays later, Harmyk connected with receiver Ryan Brethower on a 14-yard swing pass to put the Eagles up 21-0 just eight minutes into the game. Polk said the muffed kickoff ended up being their costliest error of the day.

“I think the biggest mistake we made was the fumble on that kick return. That kind of gave our opponent a big momentum shift,” he said.

The Mustangs were able to cut into the Eagles’ lead by the end of the first quarter, aided by a crucial 14-yard pass to Polk on fourth and 11, and another 30-yard pass to Polk, which set up Mustang quarterback Michael Behr’s two-yard touchdown run. After blocking an Eagles punt on their next set of downs, Behr connected with receiver Tyelor Mapp on a 34-yard TD. A two-point conversion by running back Anthony Jackson cut the lead to 21-14, necessitated after Mustangs kicker Ismael Martinez missed the extra point following Behr’s first TD of the game.
“I felt we started to pick up our tempo on offense and definitely got our confidence back,” said Polk.

Whatever momentum the Mustangs tried to build quickly evaporated in the second quarter, as the Eagles fired back with 14 unanswered points. Ryan Harmyk connected with dual 10-yard scoring strikes to Dhuyvetter and Brethower, leading to a 35-14 halftime lead for the Eagles.

“A big turning point of the game was when Mendocino scored with three seconds left right before halftime,” said Mustang Head Coach Chris Shipe. “Then they also got the ball to begin the second half, and went down and scored again.”

In the beginig of the third quarter, Mendocino received the kickoff and marched right down the field in four plays, with key contributions from Eagles running back Gregory Warren, Dhuyvetter and Jarrod Flowers, who caught Harmyk’s fifth touchdown of the day to increase the Eagles’ lead to 42-14.

LMC responded with a 42-yard drive, highlighted by running back Matt Smith’s 30-yard run and Behr’s 31-yard pass to Polk. Jackson’s four-yard run made the score 42-21, and there was still time for a Mustang comeback.

“LMC scores a lot of points, so we were concerned,” admitted Mari. “I never felt good about the outcome until the clock was at zero.”

After the team traded punts on there next possessions, Warren scored on a run from 13 yards out to make the score 49-21 in favor of Mendocino. The Mustang defense clamped down on the Eagles’ next two possessions, which allowed LMC to cut the lead to 49-28, when Behr connected with receiver Mapp at the start of the fourth quarter.

Any hope of a comeback was thwarted when Eagles running back Geno Poloni scored on a three yard run to up the score to 56-28, with only 7:58 left.

With the game essentially out of reach and now playing for pride, Mustang backup quarterback Devyn Parsons entered the game and strung together a series of completions and drove the Mustangs down deep into Eagles territory. Polk caught Parsons’ 15-yard touchdown pass to make the final score 56-34, The Mustangs (4-3) will host the College of the Redwoods Corsairs (3-4) Oct. 27. kick off will be at 3 .pm. and expected to end around 5 p.m.