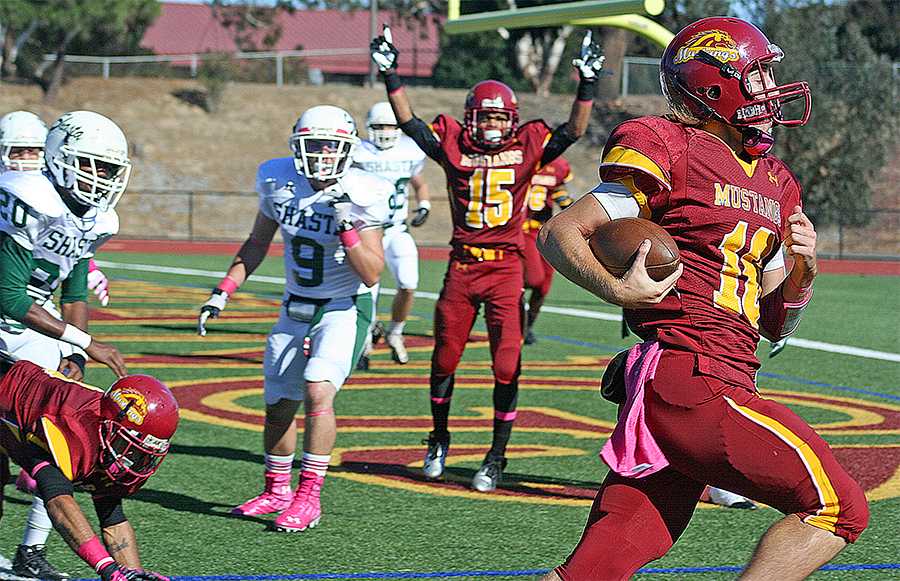 During an impressive firefight during last Saturday’s game, the Los Medanos College Mustangs pulled out another nail-biting victory over the visiting Shasta Knights, 56-49.

On a surprisingly warm October afternoon, the game against the Knights had an equally surprising outcome.
The Mustangs spent last week off, getting prepared for this conference match up, the first for both teams this season. Head coach Chris Shipe had concerns coming into the game due to the team’s time away from the field.

“The one thing we stressed all week was that it felt like we were off for a month in the bye week,” said Shipe. “I was worried about our intensity coming into today, but our offense did a good job and the defense made a play when they needed to.”

Quarterback Mike Behr started the volley throwing a 24-yard touchdown pass to wide receiver Terrence Polk, followed by a short QB sneak for a two-point conversion that put eight points on the board for LMC. Shasta attempted a response, marching the ball down the field but was stopped short of the goal line. Behr took advantage and put up another long bomb Polk for a 33-yard touchdown pass. The Mustangs followed with another two-point conversion, bringing the first quarter score 16-0.

“It was two offenses working pretty well, we just gave them too many opportunities,” said Knights head coach Craig Thompson. “They are a very good, well-coached football team here at LMC and you can’t give that offense opportunities or they will just roll you.”
And roll they did. The Mustangs scored on almost every opportunity. Behr completed a smooth 20 of 27 passes for 298 yards and five touchdowns, and rushed for 66 yards and his own 4-yard score.

Freshman running back Matt Smith took over the backfield for starter Shawn Vasquez, who is out with an injury. Smith powered the ball down Shasta’s throat, rushing for 159 yards and two game-changing touchdowns. Both Polk and wide receiver Terrence Brooks put up big numbers as well, catching for a combined 173 yards and four touchdowns.

It was the defense that fought hard and had issues early on. But when push came to shove, the guys on the other side of the ball got the job done.

“Both teams came out battling and they battled really good,” Mustang defender Demoin Stroman said. “We made a lot of mistakes that could be fixed, but overall we had a good game. The defense stepped up when they needed to step up. We had our highs and lows but we came out on top.”

During the Knights’ final drive, Schmeltzer had his eye on the end zone and his hopes on taking this game into overtime. On a short pass, Mustang defender Aaron Cole jumped in front of Schmeltzer’s intended receiver and intercepted the ball putting the final cap on yet another Mustang “close but no cigar” drive-stopper.

“We weren’t tackling very well and Los Medanos is very elusive with the tackle,” Thompson said. “Hats off to them, they are very well coached and execute very well.”

The Mustangs moved up the conference list after the win against Shasta. They are now sitting on top at number one with a 4-2 record and 1-0 in their division. Their next stop will be on the road against the Mendocino College Eagles and just one step closer to a playoff spot.

Make sure to check out the Mustangs at their next home game Saturday, Oct. 27 at 3 p.m. For more information and scores, visit Mustangs Sports Center at www.lmcexperience.com.