Bill Maher is a wretched hack 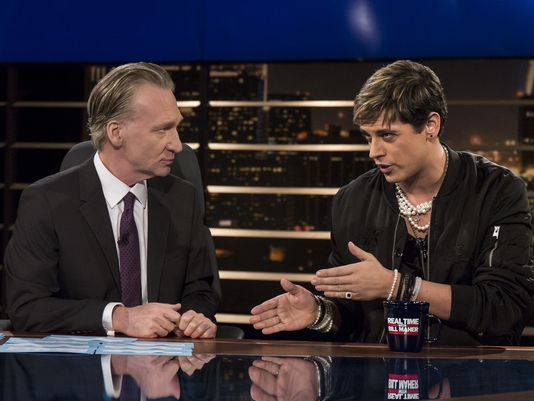 “Pride goeth before destruction,” says the Good Book. “And an haughty spirit before a fall.”

Bill Maher might not believe in the holy texts, but it has some good lines.

Maher made headlines last week when he decided to have right-wing “provocateur” Milo Yiannopoulos on “Real Time.” Maher and the then-Breitbart editor chatted about how “weird” transgendered people are — less than a week before the Trump administration would strip trans children of federal protections — and how liberals need to learn “how to take a joke.”

Yiannopoulos was once again the only one laughing Monday when Simon & Schuster pulled his $250,000 book deal after video of him promoting statutory rape went viral.

Like clockwork, Maher came to collect the credit Wednesday, saying, “Sunlight is the best disinfectant.”

Having a virulent racist — though Yiannopoulos denies he’s racist, as he only has sex with Black men — on his show and yukking it up like they were oldfriends is only the most recent link in the long chain of despicable acts that make up his career.

The talk show host has spent two decades calling Muslims every synonym of savage. As one of the poster boys of New Atheism, Maher, along with Sam Harris, has gleefully shrugged off the dogmatic chains of religion, answering only to reason, or so they say. Instead, they’ve taken up the flag of Crusader Christians, adding a false intellectual gloss to the Islamophobia of the West.

“Dealing w/ Hamas is like dealing w/ a crazy woman who’s trying to kill u – u can only hold her wrists so long before you have to slap her,” Maher tweeted in the midst of the 2014 Israel-Gaza conflict, which killed over 2,000 Palestinians. Maher has regularly commented on the misogyny of all Arab men, but doesn’t mind slapping a woman around in a bad metaphor.

Muslims aren’t the only ones who draw the ire of the man who resembles an albino weasel dunked in Vaseline. When a South Carolina police officer ripped a 16 year-old Black student out of her desk and threw her, Maher lamented the state of parenting in America, parroting a conservative talking point that blames black people for the state violence visited upon them.

When a Black Lives Matter protester challenged Hillary Clinton over her “super predator” remarks, Maher called her a “fucking idiot.” As Maher said last year, it’s not racist when Democrats are racist.

Even when you get past his rampant bigotry, Maher simply isn’t good at his job.

As a political commentator, he’s limited to a Democrat-Republican dichotomy that had him praising President Obama’s vast surveillance state while shuddering at the thought of a President Ted Cruz being in charge of it. (Luckily, this nightmare network has fallen into steady, if small, hands.)

As a comedian, he’s an utter hack, a more-racist Jay Leno. Norm MacDonald called him “maybe the unfunniest [comedian] I’ve ever encountered.”

Worst of all, he allows dumpster-dwellers like Milo and Dinesh D’Souza on. Despite that magical liberal thinking that debating racists will vanquish them, their hatred keeps on chugging along, unless they happen to defend the very bogeyman conservatives have used to justify homophobia for a long time.

Maher is nearly everything wrong with the mainstream white male liberal — centrist but full of retrograde ideas when it comes to race and gender and oh-so-willing to hold up Republicans to prove he’s Not That Bad.

Maher was quick to take credit for a happening he actively defended against. Let’s hope that pride precedes him falling down a well.