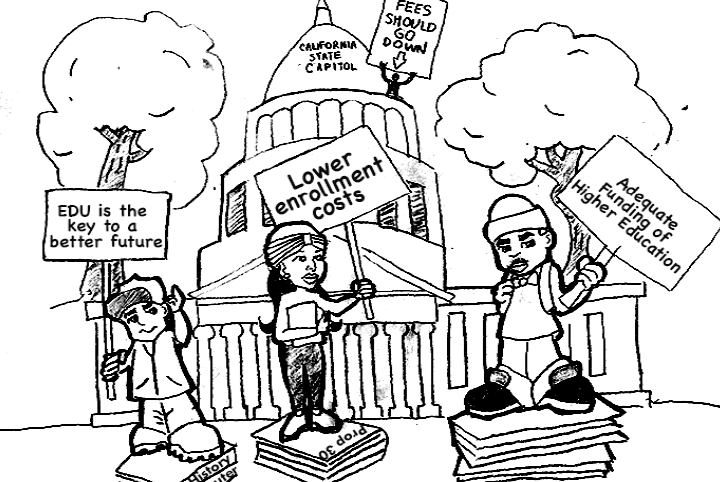 California community college students marched in Sacramento to show their support for lower enrollment costs and to protest the proposed 90 unit cap. Students who exceed 90 units would have to pay international student tuition fees. According to Los Medanos College’s website, international students pay $247 per unit, compared to $46 for California residents.

Policy makers may wonder why students accumulate more than 90 units if an associate’s degree only requires 60. They may believe the higher rate will pressure high-unit students to move on to a university.

However, policy makers are not taking into account the fact some students use community colleges to retrain for a new profession, or to make themselves a bit more desirable as they seek employment. Many of these students may be out of work or be working for minimum wage while they train for a new career.

Currently people earn at least $8 per hour in California, and it would require about 371 hours of work at such a rate to pay for one semester costing about $3,000 for 12 units. It may seem feasible, but when you take into account that it does not cover the cost of books, supplies, transportation, housing or food, it shows just how much a burden a unit cap would be.

Yes, there is financial aid, but many people are disqualified due to parental income or other factors. Again, there is a lack of consideration on the part of policy makers as to the expenses of daily life.

With the budget crisis, many policies are being drafted to offset costs. In the past, community college students did not pay for classes at all — the per-unit fee was actually $0 — and some in the march wanted a return to those days. Perhaps those days are behind us, but the fact remains colleges exist to serve students and not the other way around.

The imposition of such a fee throws up a senseless barrier, especially when you take into account that the state has its hand-out in the form of taxes.

If the goal of the educational system was understood as a way to invest in students now to increase their earning potential later, then policy makers would understand that hampering this process is self-defeating for California, especially since those with careers provide much more revenue for the state.

California’s legislators need to think long term. They must see a bigger picture and understand the value of education. How many expound this sentiment when seeking office but put it aside once they gain it?

Students, and those who value education, must make their voices heard not only in the streets, but in the polling booth as well. If the state is ever to recover from its financial hardships and secure a brighter future, education must be improved and not hampered by shortsighted measures that unduly harm students and are contrary to California’s goals.