Freedom is under fire 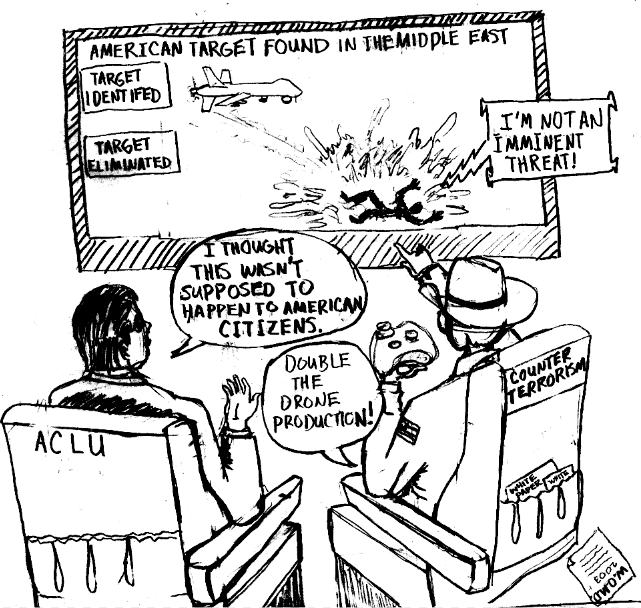 The United States of America is the hallmark of freedom in the world and sets the example of how democracy is supposed to work. Papers dubbed the White Pages have recently been leaked to the press and contain the administration’s policy concerns with rogue Americans who allegedly have ties to terrorist organizations. The way to deal with them it seems is to send an unmanned drone to seek and destroy that specific target. Yes, even U.S. citizens on foreign soil in countries we are not at war with.

In 2011 Anwar al-Awlaki, his 16-year-old son and Samir Kahn — all suspected al-Qaida affiliates — were killed by drone attacks with out having a trial or their day in court to face their accusers. They were not even formally charged with any crime that would warrant a death sentence and all three were American born.

Has America gone rogue itself? Have we gotten so paranoid that we will deny our citizens due process of law that is supposed to be protected by the Fifth Amendment, and even kill those who some officials target with little-to-no evidence.

The guidelines to use a drone to seek and destroy are: A high-ranking U.S. official must determine that the person poses an imminent threat to the U.S. Capture becomes infeasible. The operation will be conducted according to applicable war principles.

Under President Barack Obama there have been 400 CIA attacks in Yemen, Pakistan and eight times more than under the Bush Regime. Not only is the U.S. government killing its own, they are killing innocent people as well. In an article published online by CNN Sept. 25, a study by Stanford Law School and New York University School of Law found that high-level targets only make up two percent of drone attacks.

The United States of America needs to cease and desist with these drone attacks that take innocent lives, and intrude on civil liberties.

We as humans have unalienable rights and due process is what democracy is all about, and America needs to respect the laws and practice that we preach on a global level.