Thanksgiving as we grow 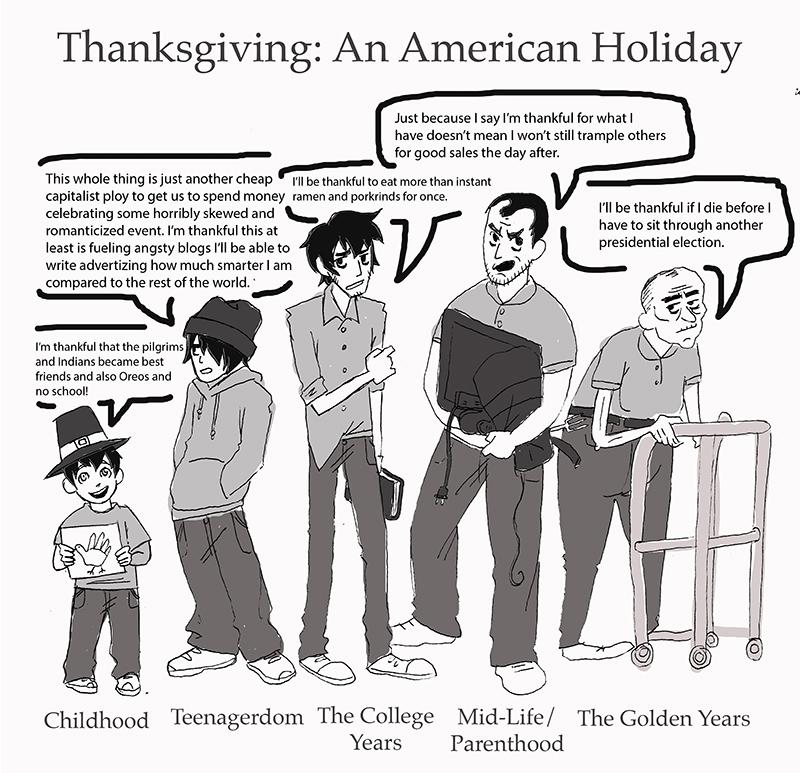 Thanksgiving is around the corner and families around the country will be gathering for the annual tradition of the holiday dinner. This time of the year often brings you together with loved ones. It’s also supposed to be a time to give thanks for the things you’re grateful for. The word grateful often sounds supercilious in a world of such shallowness and general ungratefulness.

Take the case of the recent release of the video game “Call of Duty” which drew crowds by the thousands. Some were camped out overnight to spend $59.99 on this highly coveted video game. Ironically, charities across the Bay Area are short on funds, and even shorter on volunteers. Despite the country constantly crying broke, Apple releases a new product and they will draw a similar line around the block.

People will spend their rent money in order to have the newest and greatest iPhone, despite the fact the changes are minimal to non existent. Meanwhile, a local food bank is on the brink of shutting its doors due to a lack of funds and decrease in volunteers.

Often in our society we spend so much time venting about the miniscule and mundane details of our lives, that we tend to take for granted how good we actually have it. Take Black Friday for example: Only in America will people trample each other for sales, exactly one day after being thankful for they already have.

The fact that Black Friday is the single day of the year where “Black” is considered a positive thing pales in comparison to the contradictory nature of this shopping holiday. The mere fact that companies are banking on you to go broke to put them back in the “Black” again shows a need for us to examine our priorities.

If Thanksgiving is supposed to be about giving thanks and being grateful for what we have in life, then why aren’t we doing more to show it? How does accumulating a massive amount of debt prove we are grateful? I would imagine taking a step back to be appreciative that you have a roof over your head; food in your belly, and clothes on your back would drive you to pay it forward. After all, in the spirit of Thanksgiving and Christmas would it not be in spirit to give to those who have less?

There are people out there in need and there is an abundance of charities that need financial help, volunteer help, and other needs. Burlington Coat Factory has an annual coat drive for kids and families in need of a warm coat for the winter season. Local food banks and churches are always in need of canned foods and other sources of food for needy families. Season for sharing is a charity that often helps families in need around the holidays. They often provide toys, clothes, and books for needy children. Give these charities a thought before you reach for that video game or iPhone.

There are so many things you can do to show your appreciation that you’re not destitute like so many people in the world. The easiest thing you can do though is to simply stop complaining. Sometimes that’s enough, because it could always be worse. Be thankful.