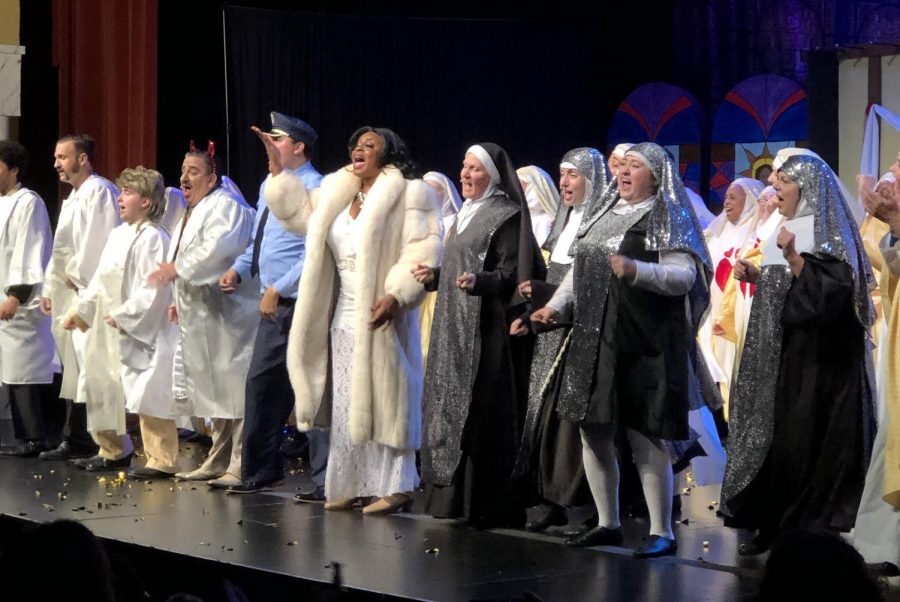 The cast of “Sister Act” rocks the pews and shares the love during their opening weekend, closing out their Sunday, Sept. 8 performance at the Pittsburg Community Theatre.

Pittsburg Community Theatre’s [PCT] opening night of “Sister Act” was welcomed with a sold-out theater. After much anticipation, the curtains for the performance finally opened Sept. 8, shortly after 8 p.m. in Downtown Pittsburg to an excited and eager audience.

The play’s director, Dianna Schepers, was very pleased with the crowd’s turnout,

“This is the largest opening night crowd we’ve had, and the energy in the room was there from the get-go.”

The performance was led by Tanika Shevaun Baptiste, taking on the role of Deloris Van Cartier. Making her PCT debut, the San Diego native has officially added “Sister Act” to her acting resume.

“We were at a point, as a cast, where we were just ready for the audience. So, for the show to be sold out, and just have the energy from everyone that was here, it was so exciting,” said Baptiste.

The crowd was lively throughout the entire performance. Lots of laughing, singing, and clapping along from the audience showed Baptiste and the rest of the cast just how much they were enjoying it,

The entire play was incredibly cohesive because of each actor’s individual performances. There were no clear instances of forgotten lines, and if there were, the actors ability to quickly improvise left the audience unaware of any potential mistake.

Audience member Denisen Hartlove had nothing but great things to say about the play,

“It was very professional and beautifully done. It raised the bar; the cast was wonderful, voices were spectacular, choreography was at a level you in at Broadway in New York. It really wants to make you come back, said Hartlove. “This is definitely a must-see, and it’s nice to see that they can bring professional-level theatre to Contra Costa County.”

Schepers is definitely responsible for the show’s early-on success. The director began working with the cast in late June, preparing for opening night in September.

Schepers said of the cast,

“They got along so well and brought their heart and soul to it, and it showed on stage. It was just the biggest pleasure I’ve ever had to direct a cast and the whole crew. It was the best [cast] ever.”

“Sister Act” will be running at the Pittsburg Community Theatre now through Sept. 22. Ticket prices will range from $22 for students to $28 for adults.

“Word is going to spread and you’ll want to get your tickets in advance,” mentioned Schepers. The show is one you shouldn’t miss!