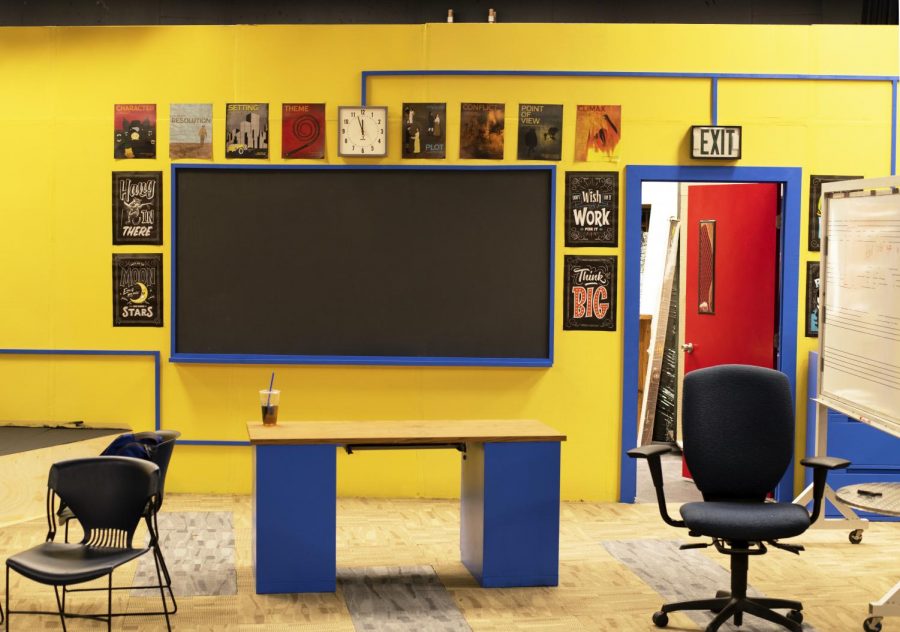 The set of the “Thanksgiving Play” will remain empty due to the cancellation of the show, which was supposed to open March 19.

The theater department’s upcoming comedy, entitled “Thanksgiving Play,” has been canceled due to the outbreak of the COVID-19 virus. All other future drama productions have been cancelled until further notice.

The decision to cancel the play was made by Drama Department Chair Nick Garcia, based on the County Health Services rule that District locations are limited to gatherings of 50 people or less.

Drama students and staff have been rehearsing for the comedic production for almost five weeks, since the beginning of the Spring 2020 semester.

“The Thanksgiving Play” by Larissa Fasthorse, is a work of satire wherein four “woke” teachers try to create a culturally sensitive pageant that both celebrates Turkey Day and Native American Heritage month.

“What I think is interesting about this play is that, I think we live in this progressively more ‘woke’ culture, where people are trying very hard to say the right thing and do the right thing to heighten their consciousness,” said Nick Maccarone, Adjunct Faculty member and Director of the “Thanksgiving Play.” “A part of the fun of this play was exploring and kind of unlearning.”

The theater cannot perform in front of an audience until further notice in order to ensure health and safety, according to Cesar Reyes, Senior Lab Coordinator of Art, Drama and Journalism. Even close friends and family cannot attend.

Dress rehearsals and production are all coming to a halt, although they were originally supposed to take place this week. Tech week, the week of March 16 to 20, will also be canceled.

“It’s just a bummer. In a situation like this, I don’t want to be self-centered but we’re all really upset. But the bigger picture is public safety,” said Grace Pruett, Drama Stage Manager and Student.

Around 700 people come to every production the department showcases.

The department has tabled the idea of pushing the play to the end of the semester or the beginning of the Fall 2020, depending on the severity of the COVID-19 virus. Drama students and staff may also have a small script reading with limited tech and a small amount of students in the audience.

“Having a production just for us, just because the kids worked so hard on it, we wouldn’t charge for tickets, just a smaller and more informal gathering, where they can get up and perform it one night,” said Maccarone

The Drama Department members are all very close and are hoping to adapt to the situation of class and performance cancellations as a group.

“Part of the performance is the reaction of the audience. So it’s sad that they had to cancel,” said LMC president Bob Kratochvil.

For more information about the impact of the COVID-19 virus on the Drama Department, please contact [email protected]