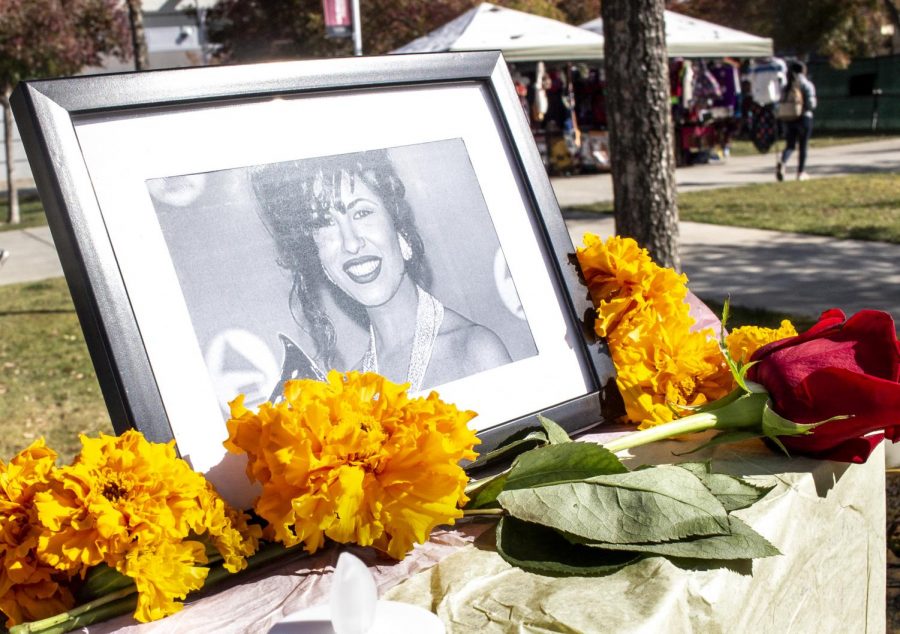 Singer and songwriter Selena Quintanilla-Pérez was celebrated at the event.

The United by Dreams and LatinX clubs hosted a Dia De Los Muertos event in the Outdoor Quad on the Los Medanos Pittsburg campus Monday, November 4 from 11:30 a.m. to 2 p.m.

The goal of the celebration at LMC was not only to honor the living and dead but to bring awareness to the holiday and the meaning behind it.

“We want people to understand why it is celebrated and the culture behind it; why it’s important,” said UBD Secretary Anel Garcia.

The celebration featured an altar in the center of the quad, displaying both family members and pets of students that had passed, and notable Hispanic individuals such as deceased singer-songwriter, Selena.

“Altar is one of the main things to honor the dead, it’s a community gathering thing. Our altar has people like Selena, and Carol, a lady who actually worked here and passed away last summer,” said UBD Co-President Richard Preza.

The altar was decorated, not only with photos of the dead but with marigold flowers, food offerings and items that the dead enjoyed during life.

The celebration also had a booth selling traditional Mexican bread, Takis and other snacks to raise money for future club activities.

“All of our funding is based off the other two fundraisers that we’ve already had this year, that we worked very hard for,” said LatinX President Esperanza Rojas. All of the funds made from the event will be put towards future events as well.

Members from both LatinX and UBD spent weeks preparing and planning out the Dia De Los Muertos celebration in the quad. Meeting weekly over Zoom calls to discuss plans for the event, many members of the two clubs put hours into preparation.

“We wanted to see if everyone has fun and share the culture of Mexican-Americans in the United States,” said Rojas. “We had Zoom meeting conference calls weekly leading up to this event.”

“We’ve been very successful at events in the past; I’ve been a part of United By Dreams for one year now. We want everyone to have fun at this event and experience our culture,” said UBD member Carla Martinez.