Feere puts on a new mask 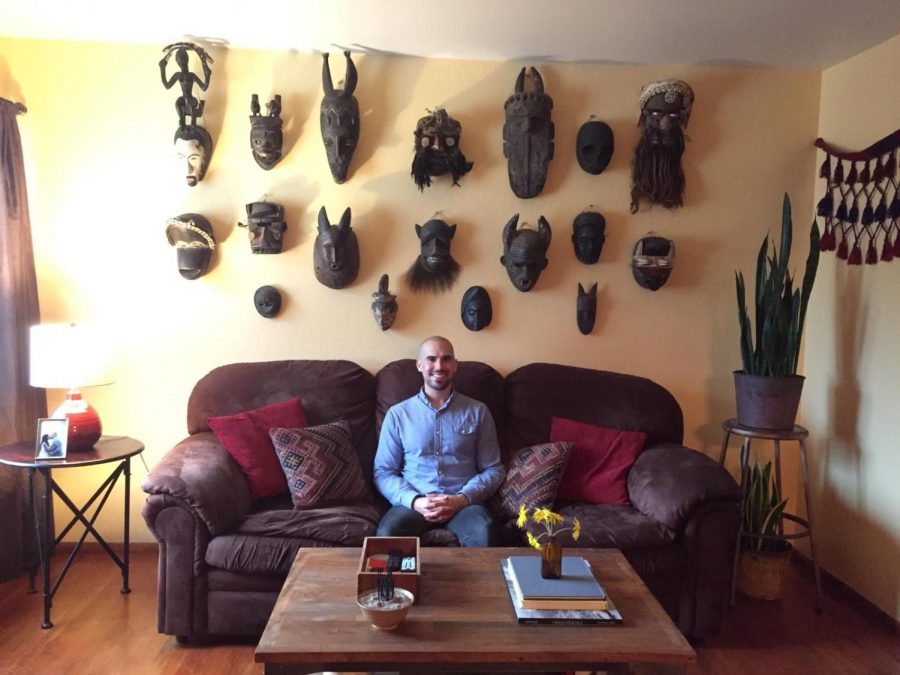 Zack Feere at his home in Antioch, sitting on his couch in front of his African art collection.

Traveling to more than 25 different countries, earning three master’s degrees and amassing a growing authentic African art collection at home are only part of the interesting tapestry of Zack Feere’s life.

After a long day of teaching speech classes, Feere unwinds with a regular routine: a relaxing afternoon sipping coffee and grading papers at a local Panera before heading to the gym and finally home to Feere.

Born in Walnut Creek but raised in Antioch, just like his mother, Feere spent his childhood as a local until he hit the college level and decided to continue his education in Sonoma. Feere attended LMC just like most of the students reading this, but it was a much smaller school then.

“I went to school here so it’s my school. It was just a big cement building when I was here and it’s been wonderful to see it change and progress,” said Feere, explaining that the library, math and science buildings had not yet been built.

Even today, Feere finds any way he can to appreciate how much the campus has changed. Whenever he receives an email about campus events or activities, job openings or scholarship programs, he shares them with his students and encourages them to take advantage of the opportunities that LMC offers today.

“I was one of the two first-ever honors transfer scholars from LMC. I did well in high school but had no intellectual confidence,” he said, adding that, “when the opportunity to join the Honors Program arose, I took it as a no brainer. I really wanted to challenge myself and take it seriously. I really just want students to take their academics more seriously.”

Even as a good student and overall well-rounded person, Feere, like many students, faced his own struggles when trying to figure out what he was going to do with his future.

“I had no idea what I was going to do with my life. I went to Sonoma State and majored in English because I was always able to write well and I had to major in something in order to transfer,” said Feere. “I had the initial idea of working in advertising and PR. I enjoyed the studies but I interned and worked at a few advertising agencies and I didn’t like either one. I was at a crossroads.”

He had recently earned a master’s degree from San Diego State University, ended a long-term relationship and moved back with his parents at 24.

“That’s when I decided to contact an old teacher of mine, Cindy [McGrath] just for information about teaching at the community college level, since it was something I was considering,” he said. “She offered to team teach with me and it was amazing. Right after that, I instantly knew this was what I wanted to do with my life. It was the career path for me.”

Given this man has three master’s degrees from three different colleges — one in mass communication and media studies, another in communication studies and, arguably, the oddball of the mix, Middle Eastern studies — it is easy to see how knowledgeable he is simply by the way he speaks as well as his varied interests.

“I wanted to study middle eastern history so why wouldn’t I do that in the Middle East? So, I studied in Israel for a year and that’s when I travelled to Egypt by driving through the desert. I’ve been to Columbia, Panama, Honduras, Mexico, Guatemala, all over the United States, Canada, Germany, Russia, Finland, Denmark, Sweden, Ireland, Norway, Portugal, Turkey, Greece and a few I’m sure I’m forgetting.”

He enjoys ordinary hobbies like basketball and reading but the most interesting is the passion for collecting and studying authentic African art.

“It started when I found a mask at an antique flea-market and from there I started to go to museums and read more about the art and educate myself on it,” he said, adding that he has a “library of African art books. It’s even something I’ve been thinking about incorporating into my classes if I can. I really like the form and function of it, the variety of shapes and pieces or the way that African artists can say so much using different mediums.”

Although he lives on the modest budget of a teacher, Feere explained that he has amassed his intellectual art collection.

“Through hard work, discipline, and dedication for tuning my eye to see what is real versus fake. It’s more available perhaps than other forms of art but it’s still hard to find,” he said.

He has picked up some pieces on his travels and said that the hunt and the find is empowering.

“I always feel a sense of progress,” he said, “Every time I spot an authentic piece, it’s like intellectual gym training to develop my eye.”

As it stands, Feere talks about his art and shows some of it off in class and often uses it as a real-life example for debates to allow students to understand certain topics better.

as it sounds, he is truly a wealth of knowledge to his students, and his extensive travels allow him to teach difficult subjects with great nuance and depth,” said Star Steers, a speech professor who also helps coach the debate team. “He has actually come to speak to the debate class about his collection and about the ethics of returning artworks to their places of origin.”

Instructors and fellow coworkers are not the only ones who think Feere’s experiences hold up in his teaching. Students learn right off the bat that he collects art and travels when he introduces himself to the class in the beginning of the semester. It’s like an ice breaker, he allows students to know about his past to develop a trusting and professional relationship with them as the course goes on.

“Professor Feere is pleasant, passionate, professional, very informative and knowledgeable. He truly cares about the subjects he teaches and wants to see his students succeed,” said student Karleen Griffin who is taking two of Feere’s classes this semester. “He has a great sense of humor that warrants a chuckle here and there and he navigates his class very well.”

One of Feere’s main goals as a teacher is to be effective.

“I want to help students succeed in my course, to develop a relationship with students and let them know that we’ll make it to the finish line together,” he said.

Feere uses common teaching techniques but with his own twist. He tries not to lecture his students to sleep and constantly checks in with the class by asking “are you with me?” to ensure he is getting active engagement.

“It’s always an honor and privilege to be in his class as I know he will challenge me to do my best, allowing me to evolve and have fun at the same time. He is a fair teacher and treats students with respect,” said Griffin.

And whether he knows it or not, he teaches more than just to those who signed up for his classes.

“Zack is a really interesting human who teaches me something new almost every time I talk to him,” said Steers. “He seems to be endlessly curious, and I admire how quickly he analyzes a situation. It is wonderful to watch him interact with students, gently challenging them to examine their assumptions. He is a great role model to students.”

Feere has lots of mentors ranging from a professor, he is in contact with who teaches him about his African art to the late Nipsey Hussle whose ideals he lives by.

“The whole notion of ‘your goal being a marathon, not a sprint,’ is inspiring to me. Eventually you’ll get there, but there’s no reason to rush through it. I am lucky and very fortunate to be where I am right now,” said Feere.