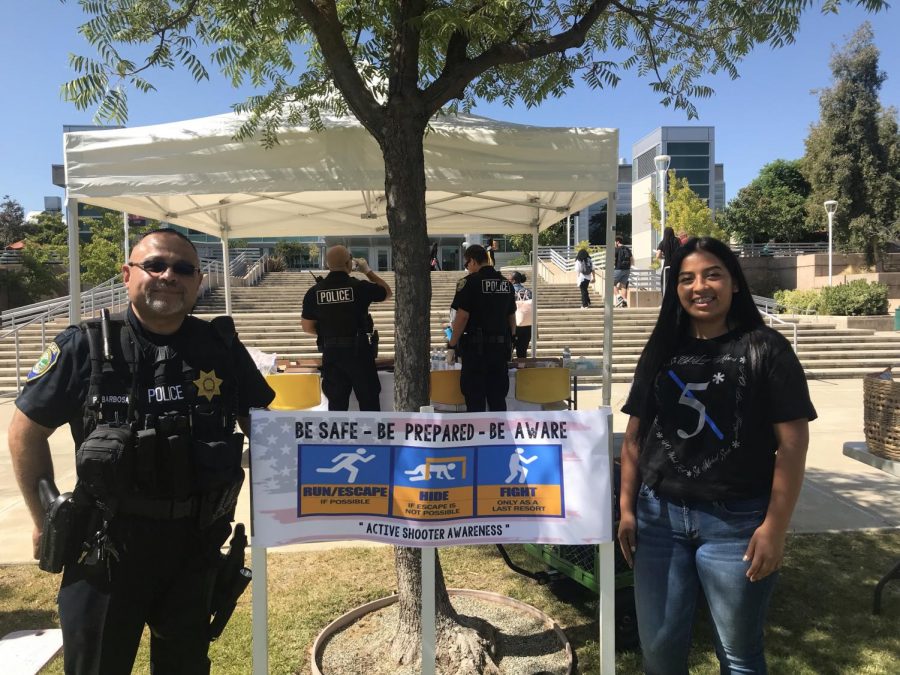 Active Shooter Awareness Week has returned this semester with a larger turnout than its predecessor.

A memorial was held Tuesday, Sept. 10 along with a presentation by Contra Costa County Community College District and the Los Medanos College Campus Police about what to do when in those high- stress situations.

The event happened on Wed., Sept. 11 in the outdoor quad to pair up with Police Pizza with a Cop that occasionally happens on campus.

During the event, the campus officers served free pizza to students while giving tips on how to remain safe on and off campus and how police campus security is a resource to them.

“During the first couple of weeks, people get lost and we want to make sure students know we’re here to help them,” said Police Officer Paul Barbosa.

The police officers around supported the event and attended in full force.

“This (Active Shooter Awareness week) is great to come together as a group. The more participation the more benefits for them (students),” said Corporal David Oleski.

Along with the demonstration and pizza being handed out by police officers, Emergency Medical Technicians (EMT) and the Veterans club were out supporting the 18th anniversary of 9/11 alongside the event held for Active Shooter Awareness week.

“We are teaching raw simulating high stress environments, teaching hands-only CPR and … doing something is better than doing nothing,” said paramedic Erica Everett, who attended the event.

There was a booth that supplied free waters, snacks, bracelets, and buttons with flyers that taught more about the event and advocating the “run, hide, fight” mentality, in the case of being confronted by a shooter.

There was even a raffle for emergency first aid kits that were given to those who gave their name and number.

“I feel like there’s more of a connection, they’re [the school] more present about this issue now,” said Esperanza Rojas, conductor of the event.

This event has been in the works for over three months and is intended to teach students what faculty are taught to do in a dangerous situation.

“I think this refreshens this kind of thinking for students. Everyone should be aware of that,” said Barbosa.

Overall, everyone seemed to be appreciative with this event, especially that it took place on Sept. 11, adding to the overall community we see at Los Medanos.

“This event is a positive thing, it’s close to home with what happened in Gilroy, you never know. It’s good to be prepared,” said Everett.