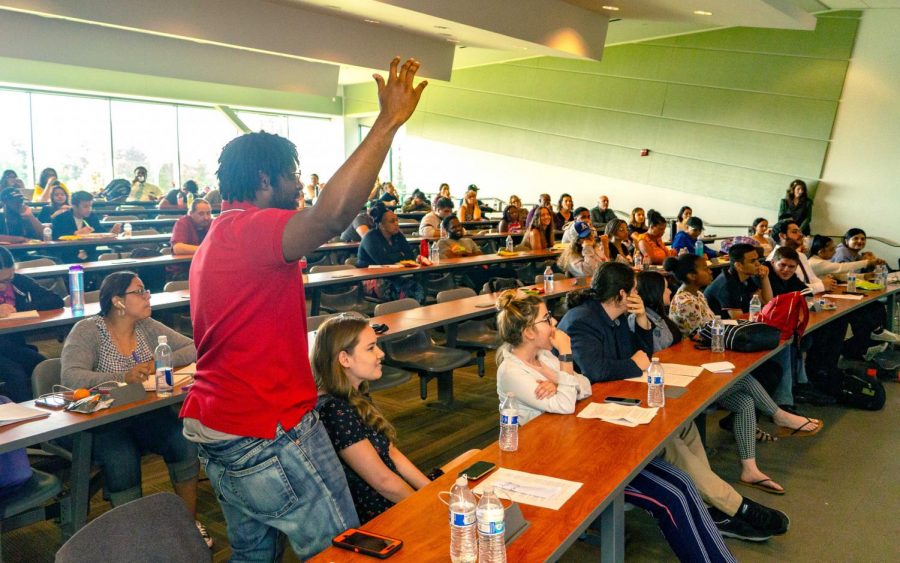 Member of the opposition, Felero Smith, raises a point of information.

Students gathered in the science building late afternoon Wednesday, May 8 to break down a highly contested topic of discussion — space exploration.

Energy levels in the room were high prior to the start of the public debate, as students and participants lined up to sign-in.

The debate was put on by coach and Communications Department Chair Marie Arcidiacono Kaufman and fellow debate coach Star Steers.

According to Arcidiacono Kaufman, the purpose of the event was to showcase the college’s award-winning debate team’s skills.

Student Jasmine Rieger stepped up to the podium first to explain some key terms of the debate, while Nia Russell, Luis Martinez and Joseph Briggs spoke about the various formalities of the academic sport.

Survival of the human race was the main goal according to the Prime Minister, Allen Hagerbaumer, who gave that criterion as what the winner of the debate should provide. Resource scarcity, he claimed, along with climate change would be the end of the human race, and was reason enough for exploration to find a new home for humanity. In addition, he claimed that great new technologies would come from the exploration.

Leader of Opposition, Gadai Bulgac, refuted by noting that humanity would simply be running away from our problems. The crowd seemed to agree with his statements. The opposition suggested proper resource management as a possible solution.

As the leader of the opposition went over time a thunderous pounding of the desks noted his time was up.

A slew of refutations was brought up by Aria Mallorca, the Deputy Prime Minister, from environmental concerns to losing a second space race, which was immediately argued as colonialism of space by the opposition.

Emily Cabral spoke as the Deputy Leader of Opposition bringing up the idea of life on Mars is much worse for our quality of life, and also brought up the idea of violence in outer space not having strict guidelines.

“If you want to actually have a future,” said Cabral, “stick with our side [Opposition}.”

A buzzword of the government, #BigTech, was used at least once in each speech, but especially in the third speech by Government Member Melissa Torres who argued for their side noting the benefits of trickle-down technologies.

But the cost of going to space was a major turning point in the debate with resounding agreements from the audience. Opposition member Kelly Williams claimed only the wealthy would be able to escape to space in the event of a world-shattering disaster.

Government Whip Jensen Ready equated the cost of VCRs to what might happen to the cost of space travel technology. The way he saw it, the only way to save Earth would involve setting it into a nuclear winter, which would result in the death of billions.

Agreeing with the government’s position on climate change, in a strong final speech, Opposition Whip Felero Smith brought back the idea of adapting or dying. Noting once again that leaving to Mars would be running from our problems. Instead, he argued that the solution to our problems lies in the depths of our oceans.

In the end, the audience decided the win would go to the opposition. Directly after the victory, the floor was opened up for questions.

Spanish professor Laurie Huffman was quite vocal asking questions and offered advice for students who have interest fields related to space and its exploration. Huffman came into the event in favor of exploration but left on the side of the opposition.