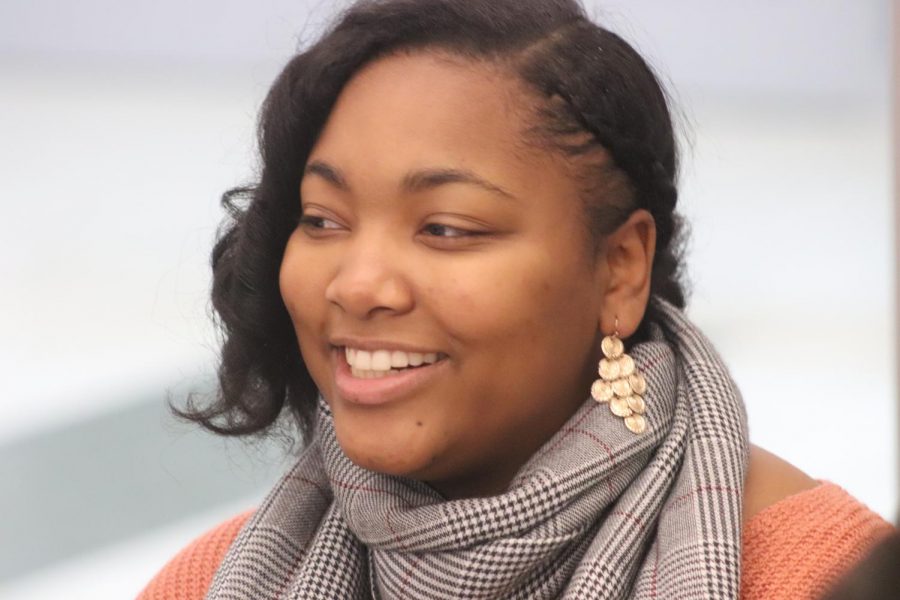 With her kind smile and disarming politeness, Priscilla Tatmon might not be the most obvious or outspoken student body president Los Medanos College has ever had, but that’s the problem with first impressions — they rarely ever tell the full story. Hiding behind that unassuming exterior is a highly motivated and passionate young woman whose commitment to her fellow students is second to none.

Tatmon was just 19 years old and enrolled in her second semester when she ascended to the student presidency. For many people, that may seem surprisingly fast, for Tatmon however, it was natural step forward, even if slightly unconventional. Although she intended to run for president in the 2018 spring election cycle, her nomination came from an unexpected source — herself.

Tatmon recalled the event fondly. Electoral nominations, she explains, are in the Spring. At one student government meeting, when nominations were being made, one student vocalized his intention to nominate himself, to which she jokingly replied, “Wow, you can nominate yourself? Well, I nominate myself to be president.”

She never thought it would be taken as a real nomination.

“But come to find out, they take that stuff really seriously,” Tatmon said.

Some time later, the other presidential nominees dropped out, leaving Tatmon as the only candidate. However, this was planned according to John Nguyen, staff adviser to the student government. He remarked that members of the board wholeheartedly believed Tatmon was the best person for the job so the other nominees dropped out, securing her election.

Indeed, that sentiment was not without merit. Although she was only a first-year student when she became president, Tatmon had already gained experience by serving as both a representative and senator on the board. Being a senator exposed her to new and diverse student experiences and challenges and ultimately served to inspire her decision to run for president.

“As my first year went on, I was so moved by the different things that went on around campus and how student voices really can change the perspectives of the adults at the school,” she said. “I found my passion.”

Her fellow students’ support was well founded. Being LMC’s student president has only increased Tatmon’s unwavering advocacy for student government and the importance of students having a place for their voices to be heard. Supporting students and creating a safe place for them to speak are driving forces in her dedication to the students of LMC.

“I feel a responsibility to make sure our voices, student voices, are heard and not overlooked by the administration,” she said. “All the hard topics that are being talked about, I want that brought out from the student perspective so it can be easier to work together with administration to change different policies and different things on campus.”

At student government meetings, her conviction to support student opportunity and ensure every voice be heard is on full display as she oversees the board. She has an easy confidence about her and commands weekly meetings with a casual but deliberate focus, attentively making her way through the pre-scheduled agenda. As president, part of her role is to call for votes on various student proposals and allow for every senator, officer, representative, student or staff member in attendance time to report on their findings or speak on whatever topic important to them.

While the weekly meetings produce a lot of good discussions and student involvement, she acknowledges overall student attendance remains low and more can be done.

“There’s room to improve and grow and we’re working on finding different ways to promote LMCAS,” she said. “In the past we’ve talked to different students about it in our office hours but that’s not broad enough, so we’re trying out different tactics we can use to promote it more.”

Building on her push to increase participation in student government, there were a few new faces at a recent meeting. One first-time attendee was well known to Tatmon, her younger sister Deborah, who as a first-year freshman attended so she could formally announce her intention to run for senator.

Born and raised in the East Bay, Tatmon comes from a large family with close ties to the school. She’s the 12th of 14 children, nine of whom have gone on to attend college at LMC. You could say it’s become somewhat of a family tradition.

With most of her family living in the area, attending LMC made the most sense from a financial standpoint while also offering her the chance to follow in the footsteps of her older siblings.

“I wanted to go to LMC because it was convenient for my family,” she said. “A lot of us work and so I help take care of my younger siblings.”

Unsurprisingly, Tatmon only considered LMC when deciding where to continue her education after high school. No doubt, having so many siblings prepared her to handle a room full of people, something she does with ease every Monday afternoon when the student government meets.

Tatmon’s leadership can be seen elsewhere on campus as well. Swapping the gavel for the glove, she was chosen to be a co-captain of LMC’s softball team, a clear indication of a natural capacity to lead no matter the circumstance.

This is only beginning though; student presidents serve a full year before they have to decide if they want to run again. With one semester in the books, she said she’s looking forward to making improvements and continuing to build on that progress this semester.

“One thing I think I can improve on is getting more involved with events on campus, just promoting student government,” she said. “Be better with informing students that they can come and talk to me, that I’m here to represent them and make things happen.”