"I want the students to learn about the Mexican culture and the beauty behind Dia de los Muertos," said Coronado. 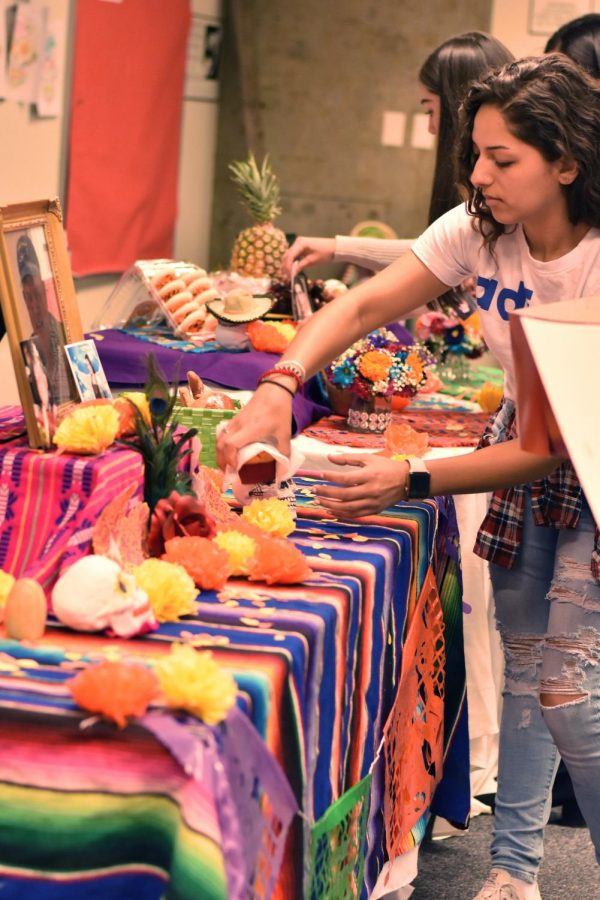 Jasmine Solano adds a cupcake to the ofrenda.

Dia de Los Muertos and Halloween have become somewhat tied over the past few years in a wave of cultural trading. Los Medanos College is celebrating Dia de Los Muertos in more ways than one, with classroom and public events being held on campus. This day means a lot to people in the Latinx community and LMC intends to do their part to share the traditions of this day and build community bonding on campus.

Spanish professor, Victor Coronado held an annual ofrenda and potluck for all of his Spanish classes to demonstrate the meaning of the day. The celebration was set up by students and Coronado himself with many of his students bringing photographs of lost loved ones and food as offerings. Students brought food from different origins to share with the class and set up as offerings such as pan dulce and fruit.

The ofrendas were beautifully decorated from top to bottom with vibrant colors and patterns relevant the Mexican community. Cempasuchil flowers, portraits, candles, incense and food blanketed the ofrendas with more color and life.

“Even if you don’t believe in something, being part of a celebration opens your mind because you’re learning about other cultures and why they do it,” said Coronado. “I do it because I want the students to learn about the Mexican culture and the beauty behind Dia de los Muertos.”

While remembering and reminiscing times with loved ones may seem grim to some, the focal point of the holiday is to celebrate life itself and enjoy time together.

“It should be seen as a hopeful thing and not a sad thing,” said Karina Gomez of Coronado’s class.

Conor Cruze had a portrait prominently displayed on the altar of his late grandfather for the class as did many other students. No tears were shed at the thought of their lost ones, as again it was a happy event to remember good times.

Cruze comes from a Catholic background, but is open to hearing different takes on spirituality and religion.

“I can learn different spiritual ways of thinking,” Cruze said. “I do think it helps the community overall.”

Cruze also believes these events are significant because of the large amount of hispanic people living in California and to build tolerance for other people’s culture and. Honoring Hispanic Americans is also important for him, he says, because of the influence hispanics have in this country.

Coronado whose wife is of Jewish faith, pushes hard for tolerance and acceptance in all areas of life and showed that living together in peace is important today more than ever. He shared personal experiences his family had at the beginning of the class when they heard about the massacre at the synagogue in Pittsburgh, PA.

He is optimistic about events that promote cultural outreach and hopes for a future where we can all accept one another.