Concert hits all the right notes 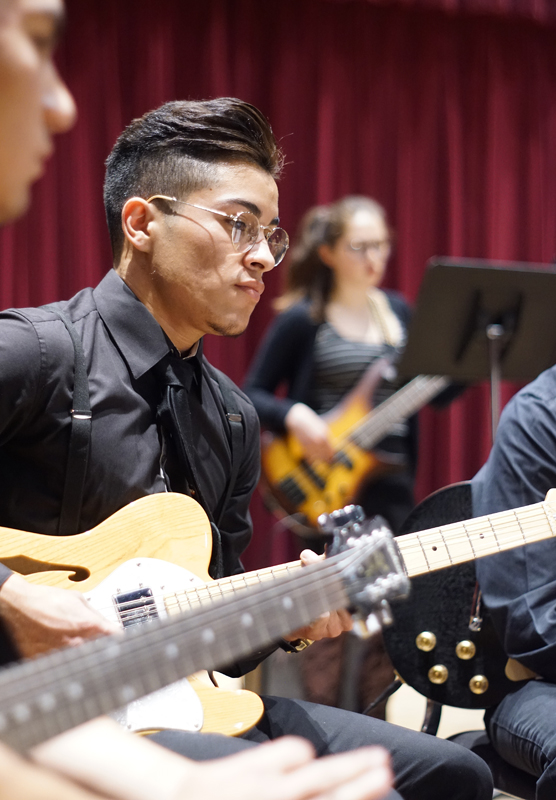 Freedom and Chilcott were the first to perform. The band played a total of five pieces, with each bringing a change of pace to the performance.

Freedom began on a high note with their first piece “Bay Side Groovin’” by Michael Sweeney. The second piece “Lament” by Benny Golson was just as gloomy as its title would suggest.

That piece was appropriately titled, “The Sermon” by Erik Morales. “My Funny Valentine” by L. Hart and R. Rogers was a ballad. They ended on a more calm and smooth note with their final piece “Killer Joe” by Benny Golson.

“This is the LMC Night Band Plus and it’s comprised of college students, high school students, and some of my friends,” Earnest said as he introduced the next group.

Among the group were professional players like Chilcott himself and Larry Widener from Deer Valley High School. The group also included college students from Diablo Valley College. Other surprise elements, like LMC vocalist Solomon Uhuru gave the LMC Night Band Plus an interesting format.

“There is no one leading the band, so we’re trying something new and unusual,” Earnest explained. “That is, we’re playing by feel and so we have a cut off expert up front [to lead us].”

The group also played a variety of pieces ranging from the classics to a heavy bluesy sound. The first piece was “Doin’ the Bathtub Boogie” by Gordon Goodwin, followed by “Singing in the Rain” by Arthur Freed with vocals by Uhuru. “Wah, wah!” by Howard Rowe came next and “Blu’z Jam” by Three Guitar Guys turned out to be a crowd favorite. Uhuru made a final appearance for the Plus band when singing “You Stepped Out of a Dream” by Nacio Herb Brown.

To close, Earnest brought back the Freedom High School students for an encore. Together they played the impromptu piece “Song From my Father” which was not included on the flyer. The song was what Earnest described as a fun exercise to evaluate the band’s sight-reading.

“The band has not seen the music, the director has five minutes to talk it through and answer questions… So we’re going to do that right before your eyes,” Earnest said.

Like their performance for “Blu’z Jam,” the band meshed well together and produced a big finish. Director Earnest looks forward to more collaborations like this one and suspects there will be another sometime in May before finals.