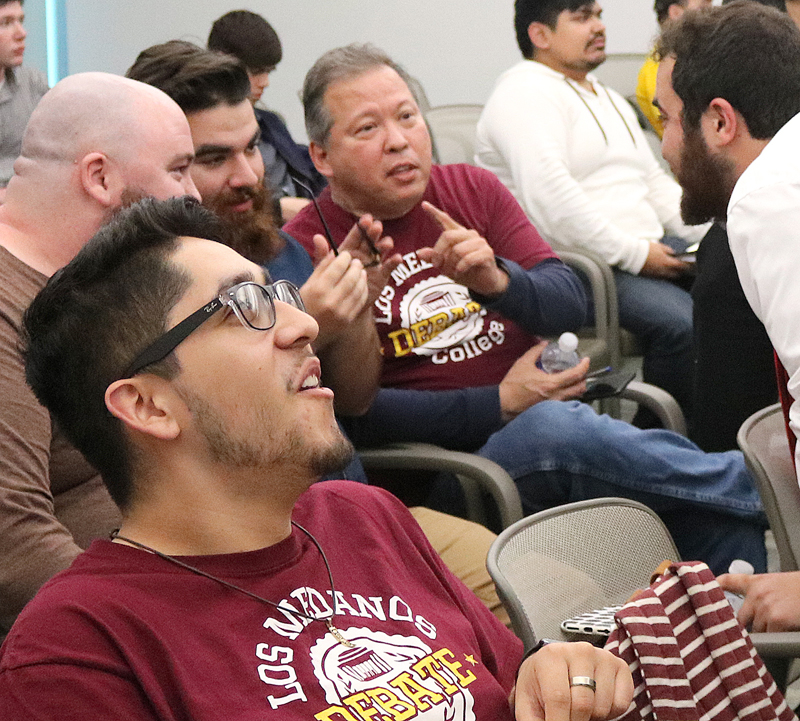 Saturday’s registration and breakfast kicked the event into gear with formal introductions from faculty and facilitators. LMC Debate Coach, Marie Arcidiacono, was at the helm, organizing and preparing the two 12-hour days with the assistance of professors Star Steers and Edward Haven, who also coach the team.

Haven, who has been assisting Arcidiacono since fall 2017, said “It looks like we’re on a really good trajectory and we have a really great mix of experienced people, as well as younger, kind of new people coming in.”

Haven continued, “What’s really cool about the format that we do and the style that we do is that it’s very open to anybody. You don’t have to have some great background or experience.”

According to Haven, debating is something you can easily pick up and participate in. He says arguments are really more about the actual quality and substance.

Haven appreciates the talent he’s found in the debate team. He says it’s amazing to see how much they support each other and work together.

There was chatter, laughter and lots of excitement filling the second-floor halls of the Math Building as anxious competitors seized a upon moment of calm before the battles of the wits ensued. Many students who had competed together at prior tournaments found it easy to decompress after blistering rounds of competition.

LMC entered five two-member teams in the tournament: Dylan Lee and Richard Stanfield, Gadai Bulgac and Hailey Solares, Ayesha Khan and Brian Kiar, Felero Smith and Marco McMullen, and Genaro Mauricio and Kyle Marshall. UC Berkeley took home the Steeltown Championship. Ironically, Dennis Tekell, a former LMC debater, founded the UC Berkeley Parliamentary Team. He loved this style of debate so much that he started the program when he transferred to UC Berkeley, according to Arcidiacono.

“Our wins are a reflection of our coaching staff, “ said Stanfield. “We did a lot of practice sessions.”

partner for two semesters prior and they “had gotten pretty used to each other.”

About winning, Stanfield said, “It was good. It’s always nice to get recognition.”

“You never know what motions you’re going to get,” said Solares. This was Solares’ second tournament ever and her perseverance paid greatly.

She said, “I was pretty confident, but I had a new partner so I was a little nervous. It’s a great experience.” She added, “It’s hard at first, but just keep going.”