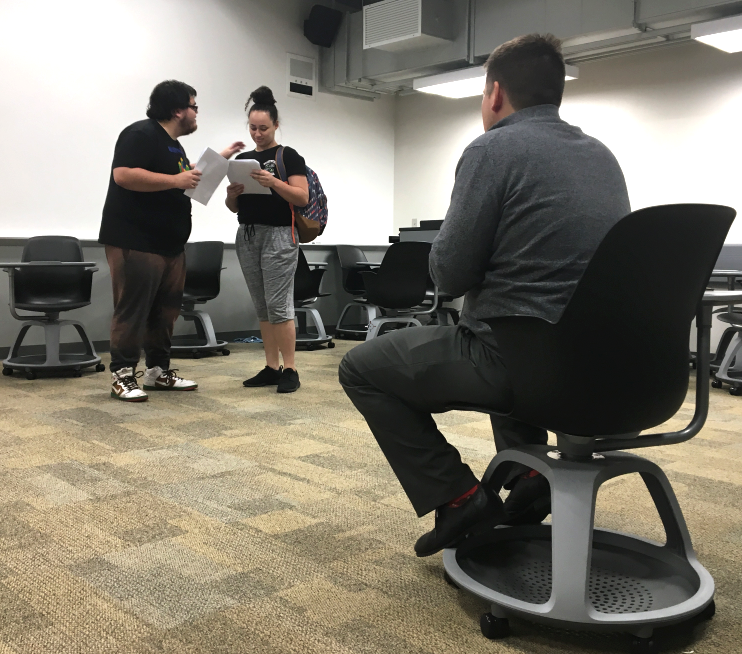 Adrenaline, anxiety and fear spewed over into the hallways of the College Complex as both seasoned and new actors prepared to audition for the upcoming LMC Drama Department’s production “Hand to God.” The play follows Jason, a young man who finds an outlet for his anxiety at a Christian Puppet Ministry in the devoutly religious, small town of Cypress, Texas. Jason’s complicated relationships with the town pastor, the school bully, the girl next door and his mother are thrown into upheaval when Jason’s puppet, Tyron, takes on a shocking and dangerously irrevenent personality all its own.

Written by Robert Askins and directed by LMC’s drama instructor Jack Nicolaus, “Hand to God,” explores the fragile nature of faith, morality and the ties that bind us.

Bringing their best game, experienced actors prepared themselves with tongue curls, cheek pops and lips smacks. Enunciation, pronunciation, tone, emotion and rhythm were part of the prep work utilized by advanced drama students who know the importance of being able to drop into a blank slate, a neutral and relaxed body that can easily adapt to the character they are about to read for.

“Coming out of my comfort zone to audition for this production took a minute,” said Jyessica Morin, who has auditioned for other Drama Department productions in the past.

“Once I read, “Hand to God” I realized it was fun, but really different from the other plays, “ she said. “I was excited to try something new.”

Three evenings of auditions brought many theater majors and new LMC students like Ryley Lim. As a new student, Lim was honest about being nervous about auditioning but maintained his composure and stayed through the wait for his turn to read.

According to Nicolaus the play was chosen with great thought.

“Generally, plays are selected with the intention to match the seriousness and weighty tone of society,” said Nicolaus.

He and department chair, Nick Garcia, spent a lot of time sorting through plays and a lot of thought was put into how they related to each other.

“With so much going on in the world today, “Hand to God” is the type of production that the department agreed would lift the mood of the campus, giving theatergoers something else to think about,” Nicolaus said, adding “We decided to change the tone, we want to give the people a chance to laugh.”

Monday morning the results of the auditions were posted: Jason Miller as Jason, Ariel Dunn as Marge, Terryn McMury as Timothy, Clare Barton as Jessica and William Thompson as Pastor Greg.

Rehearsals started Tuesday and the drama department is getting in gear for the big show. Play dates are scheduled for March 8,9,10,12,15,16,17,19 at