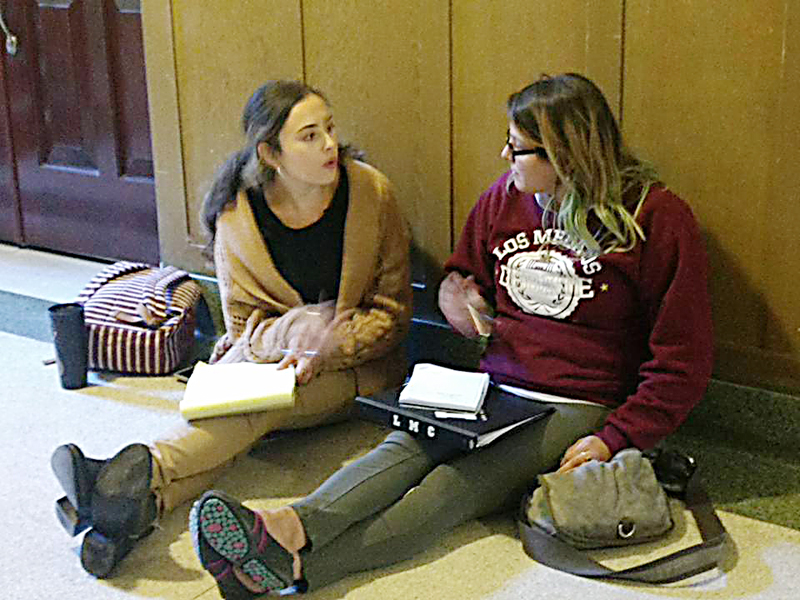 Hailey Solares and Kirstie Tabelin discuss topics, techniques and plans of action for their upcoming debates.

Los Medanos College’s debate team held their own in The Penguin Invitational Nov. 4 and 5. Hosted by Dominican University, nine colleges — more than 115 participants from across the country — gathered for the event.

The honor of Top Community College Team in British Parliamentary  (BP) Debate went to Los Medanos’ own Kyle Marshall and Christopher Chu — this tournament being Chu’s first ever.

LMC debaters competed with schools from all over the state and across the country like The University of Mississippi, University of Miami, Northwest University, UC Berkeley, Pepperdine, Cal Poly San Luis Obispo, Claremont College, Humboldt State and the host school.

Khan, new to the debate team, found her first experience “empowering yet humbling” — wetting her feet in the fierce competition. Khan paired up with Nirankari — another first time tournament debater — and both were confident and reserved as they strategized together to hit the mark in their competitions.

“This tournament was a re-learning experience for both my partner and myself, “ said Richard Stanfield, president of the debate team and veteran debater. Both he and his partner (Dylan Lee) were paired together for the first time.

“My partner and I are still in a new partnership, we were able to find some flaws and fine tune the better parts of our collaborative process,” said Stanfield.

The team is preparing for their upcoming competion at the Claremont Colleges for the US National Debate Championship Nov. 17-19. Anyone interested in debate is encouraged to stop by CC-115 at 4 p.m. Wednesday’s to see the team in action.