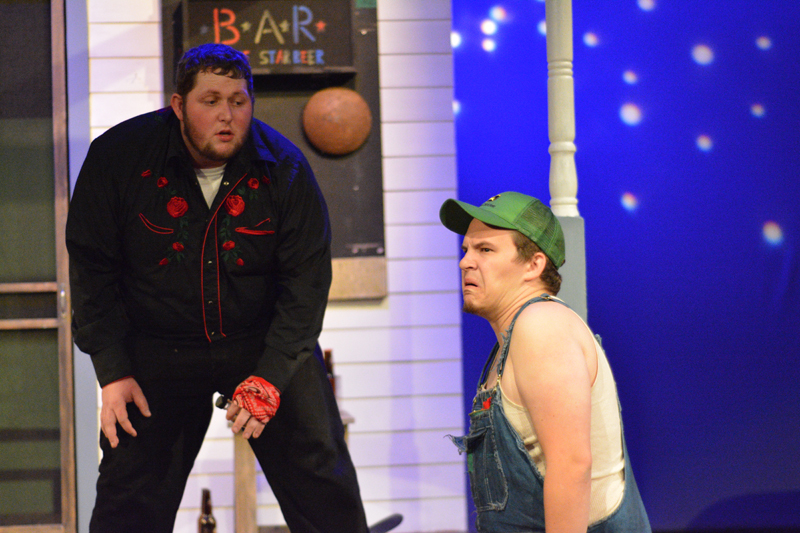 “Laundry and Bourbon” written by James McClure and directed by Barbara M. Norris, was the breath of comic relief many theatergoers relished in as they spent two hours submerged in the antics of the Southern hospitality characters who graced the LMC Little Theater’s stage Monday evening.

Directors notes gave insight to the play and the author’s intension in writing the script: McClure wrote the play about the effects of the Vietnam War on vets and their families. “The brilliance of the play,” as described by Norris, “is McLure’s ability to touch on these issues with humor that disarms us, so that his brief moments revealing human suffering and memories of that suffering stand-out from the rest of the play — just long enough for the audience to notice…. and perhaps think about… especially in terms of care and compassion for vets of all wars and their families.”

“Laundry and Bourbon” opens the playbill of duo performances. The play is set on the porch of housewife Elizabeth (Katie Garcia) who’s Vietnam veteran husband has been missing for two days. She has visits from her two gossiping buddies: Hattie (Elysee Green), her best friend who has a house full of rambunctious children constantly wreaking havoc wherever they go, and Amy Lee (Ariel Dunn) born in poverty but now married to money.

The Southern drawls perfected by the actors would have made any Southern woman proud. Quick wit and endearing facial expressions brought much unexpected laughter from the audience. Frolicking and laughter spiked with Bourbon made for a delightful opening act, leaving the audience with questions to hopefully be answered in the next show.

“Lone Star,” named after the beer drunk in rapid succession by Elizabeth’s husband Roy, opens outside a local late-night watering hole in Maynard, Texas. Vietnam veteran Roy (David Kluzek) and his slow-witted but good-natured little brother Ray (Austin Trenholm), both squabble among themselves and with Cletis (William Thompson), their anxious and nerdy friend. The battles are not of wit but of testosterone — with the obvious winner being Roy — but Ray kicks his brother off his high horse with riveting news of a secret he’s been keeping.

The actors had perfected their parts and it was evident a lot of work was put into the production. Director Norris said she gave her actors suggestions while allowing them free reign to develop their characters, as they perceived them. “I had to really research Cletis.” “Determining a characters motivation is very important when getting a role in a play,” said Thompson. “I realized I had a lot of characteristics like Cletis, who ran his own business and was nerdy. Finding how Cletis fit into the whole play was the rewarding part adding depth to my character.”

The audience could tell the actors had a hooting and a hollering good time. Getting to hear Roy and Ray share a duet, “Your Cheating Heart” by Hank Williams demonstrated how actors often go out of their comfort zones to entertain their audiences. The plays were fun and filled with hilarious moments of explicit language peppered with descriptive interpretations of private parts.

If you haven’t had an opportunity to see Lone Star and Laundry and Bourbon you can still catch the show. Remaining performances run through Oct. 20, 21, 23 at 7:30 p.m. Ticket prices for the evening shows are $12 with student ID/Military ID, $15 general admission; $12 with student ID/Military ID $10 for middle school students with ID Tickets can be purchased on line up to one hour before show time or at the door For online information go to: http://www.losmedanos.edu/drama/productions.asp