A festival of creativity 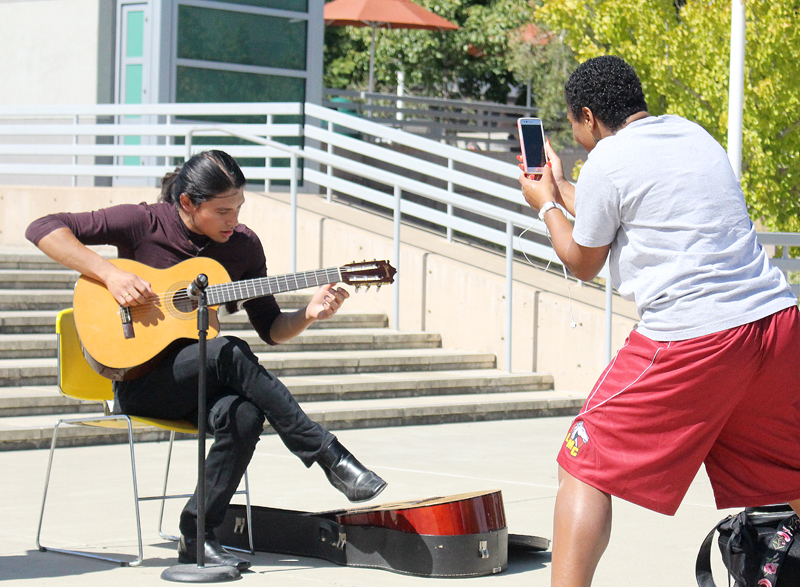 One of the many ways a community can showcase its diversity is through cultural appreciative celebration, and that’s exactly what Los Medanos College did at the Hispanic heritage Music and Arts Festival last Tuesday, Sept. 21 in the outdoor quad.

Puente sold Tacos while LMC’s Society for Advancement of Chicanos and Native Americans in Science sold beverages. In the background, attendees could be heard singing along to various subgenres of Latin Music and socializing with one another.

Featured at this event, was an arts and crafts table where Professor Laurie Huffman taught people how to make flowers out of metal rods and crepe paper. There were coloring pages to be colored and maracas to be painted.

SACNAS member Anthony Bartoni was not only aiding people in quenching their thirst, but also generating interest in the SACNAS program.

Bartoni also mentioned SACNAS is attending the National Diversity in STEM conference in Utah from Oct. 19 to Oct. 21. He explained that at least year’s conference; there were representatives there from campuses across the nation.

”Every single university you could think of, was there,” he said. “We were one of the few Community colleges.”

He explained, this is one of many opportunities given if you’re a member of the program.

Puente Coordinator Stacey Miller was outdoors as well assisting those serving food. She said when students come to events like this, she wants them “to be able to see themselves represented.” She emphasized this saying this celebration along with any other festivities held this month, “is a celebration of all Latin American cultures, not just one.”

Midway through the event, Student Manny Jimenez broke out his guitar and played several songs for the crowd despite the technical issues with the mic stand and the construction going on in the background.

At one point, Student Dominique Walker approached the steps in front of the Student services Center where Jimenez was playing and began snapping pictures as he was singing.

“I think it’s a beautiful thing. It’s a great event to be a part of,” said Walker. She herself came out to enjoy the festival because it was a good opportunity to get away from the stress of everyday academic life Walker also said “uplifting events like this bring enlightenment and awareness to this campus.”

Puente Student Vanesa Rangel said it’s important to have events like this for Hispanic students as well as for students not a part of those cultures. “It’s celebrating culture. You’re celebrating everything you went through as a community,” she said. “We’re all coming together as one.”

Rangel specifically acknowledged the festival as being a beneficial source of fun and “people are happy and events like this make them feel good,” she said, smiling.